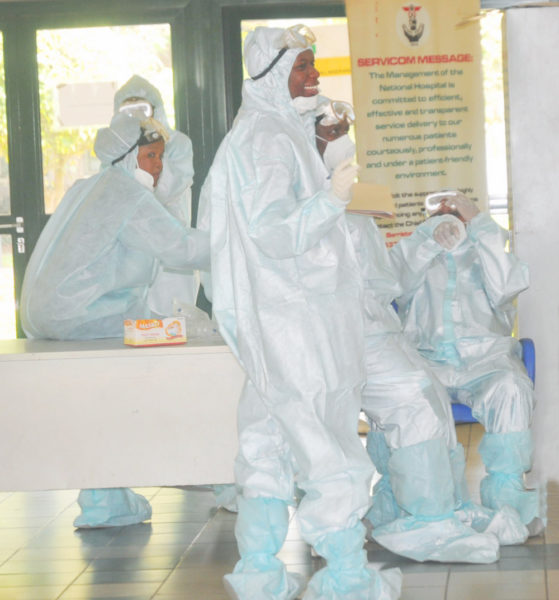 The minister also inaugurated a 25-man committee to work out modalities for responding to the threat of Ebola virus and create awareness on the nature and symptoms of the virus.

Mohammed made this known during a high powered stakeholder’s interactive forum in Abuja on Monday.

He said the hospital was chosen because it would be easy for the people of the FCT to access it.

He said a ward would be designated in the hospital where the people could be quarantined and be on surveillance, among others.

He said that adequate infrastructure and equipment would be put in place to manage affected persons and guard against the spread of the virus.

“All precautionary measures have been put in place to ensure that the designation of the ward will not endanger the health workers and residents of Kuje’’, he said.

The minister instructed the Chairman of the council to sensitise its populace, rather than preventing FCT Administration from using the hospital.

“The hospital is the only option for us to isolate as a centre for Ebola patients; Gwagwalada hospital that is for FCT has being taken from us, we have no other option than to use it.

“We will put all infrastructure needed in place to avoid its spread; doctors will be given adequate training and best way to curtail the disease from spreading’’, he said.

He, therefore, advised the six area council chairmen to sensitise their people on routine cleaning and disinfecting their hands at all times.

Dr Demola Onakomaiya, the Secretary of the FCT Health Secretariat, said the transmission of the disease in humans was through direct contact with blood or body secretion, among others.

Onakomaiya denied the recent rumours of Ebola in the territory, adding that the three suspected cases being raised by FCT residents were mere rumours.

According to him, the people at risk of the disease are the health care givers and family members of infected persons. There is no specific medication or vaccine for its cure.

Dr Rui Jaz, World Health Organisation Country Representative, said the organisation would support the administration in its plans to curtail the disease.

Jaz said it was untrue that bitter kola could cure the disease as speculated, adding that it had not been proven by scientists.

“We are planning to hold another meeting very soon to call off our strike that has lasted for more than six weeks’’, he said.

The Chairman of Kuje Area Council, Mr Shabal Tete, said the designation of the hospital as Ebola centre was not a welcome development to the people of the area.

According to him, this is because most of the people are ‘illiterate.’