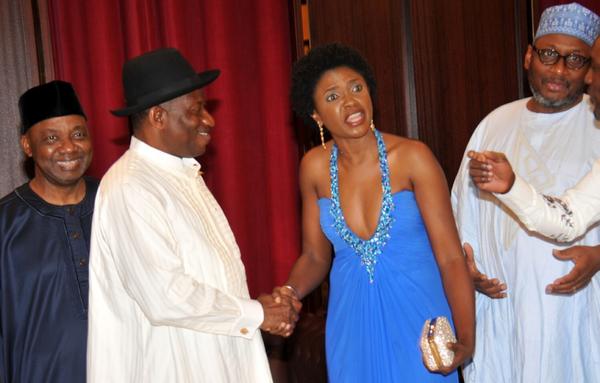 When Nollywood actress Omoni Oboli got invited by President Goodluck Ebele Jonathan for a private screening of her movie – Being Mrs Elliot, it was an exciting day for her as well as other Nollywood practitioners.

Hours later, photos from the screening were shared by the Presidential spokesperson Reuben Abati. In one snapshot, Omoni Oboli is seen shaking the President with her decolletage on full display.

Her dress was highly criticised but in other photos, the dress seems a little more appropriate, which made many defend her and say it was the angle of photography.

In an interview with Punch, Omoni speaks on that dress as well as if she got any money from the President.
On the dress: “I styled myself and I thought the outfit was appropriate because there were no vital parts showing. Sometimes the angles with which pictures are taken can portray certain things you do not have intention of portraying. We have pictures from the event and you won’t see what people are seeing.

The truth is that a lot of people are very bitter and when people are bitter they try to look for a lot of negative things in every positive thing. It is unfortunate that we are in the limelight because if someone else wears that outfit no one will say anything. I don’t even read blogs and see the comments. My true fans know who I am and my intention when I am doing things.”

On if she got a package from GEJ: “Before the screening, they asked me what I wanted and I said I didn’t want anything but that the President and his people should see the movie and give their blessings. For me that is good enough for the industry. The first time I ever saw the President was at his brother’s burial ceremony, which I attended. I don’t know him from anywhere or personally.

During the event, President Jonathan said the government didn’t have money to give me and he said this in front of everybody. So if anybody is going aside to say something else, they are wrong. I returned to Lagos with the small purse I took to the event and after the event I went back to my hotel room and left for Lagos the next morning. I didn’t stay back in Aso Rock or sneak out to meet anybody. I am still hoping they will call us to come and take something, that they are impressed.”

Ebola: Stella Damasus kicks off Petition for FG & WHO to give Posthumous Award to Dr. Ameyo Adadevoh

Ladies, do you Find Men with Dogs Adorable or Not? See these Celeb Photos!