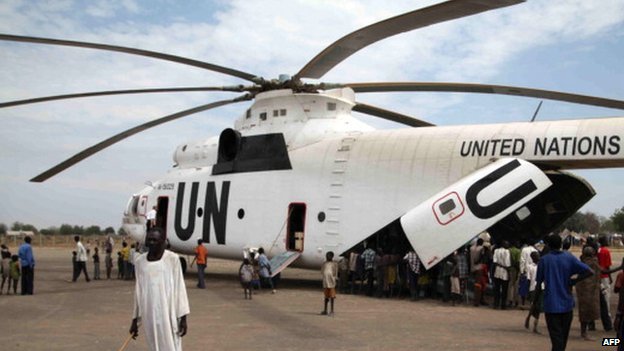 The United Nations has revealed that one of its cargo helicopters has crashed in South Sudan. There are unconfirmed reports that it was shot down.

The UN mission in South Sudan said that three crew members died, while one survived.

An official for the UN told the AP news agency the Mi-8 helicopter had apparently been shot down.

According to the BBC, thousands of people have been killed this year in bitter fighting between South Sudan’s army and rebel forces.

Associated Press reports that a government official has accused forces loyal to rebel commander Peter Gadet of shooting down the helicopter. His forces have not yet commented.

The UN has played a vital role in helping feed over 1.8 million people who fled their homes after fighting broke out in December 2013.

Related Topics:UNUnited Nations
Up Next

Nigeria Has Contained Ebola, Only One Case – Health Minister