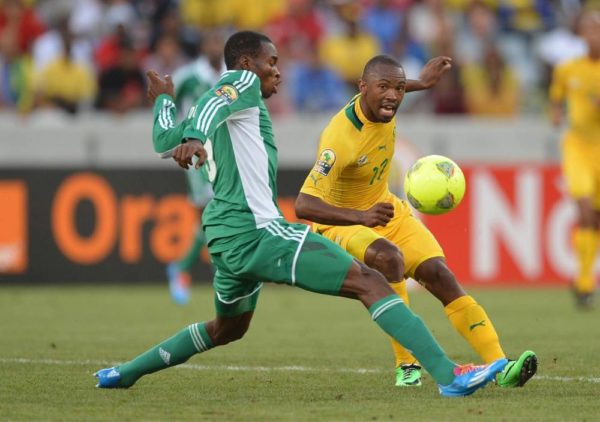 The match which was electrifying saw the young Bafana Bafana hold their own against the AFCON 2013 defending champions.

Sibusiso Vilakazi showed some class with his superlative turns and touches which kept the Super Eagles defence constantly busy.

The best chance came for the Bafana Bafana in the first half when Oupa Manyisa failed to connect a superb cross from Mandla Masango, whose shot was blocked by the Eagles defence.

The Super Eagles looked dangerous on the counter-attack and threatened to open scoring in the 33rd minute when Ahmed Musa had a chance to score for Nigeria but was neatly tackled by Anele Ngcongca.

The tackle, however, denied him the opportunity to put Nigeria ahead.

The frustration of the game affected Mikel Obi when he engaged Thabo Matlaba in a heated argument just before half-time after he tried to manoeuvre few sliding tackles from South African midfielders.

Both sides gave good accounts of themselves in the second half with the Super Eagles coming close to scoring on several occasions but failed to utilise their chances.

Bafana Bafana almost caught the Eagles defence napping in the closing part of the encounter but were denied by goalkeeper Austin Ejide who managed to impress his fans after the team’s loss to Congo in Calabar.

The result in Cape Town meant that Nigeria still occupied the third place in Group A with one point having lost the first match 2-3 to Congo Brazzaville in Calabar.

Congo are now top of the group with six points after a 2-0 defeat of Sudan in Brazzaville earlier in the day.

South Africa occupy the second place with four points from two matches after a resounding 3-0 defeat of Sudan in Omdurman on Sept. 5 and a draw with Nigeria.

Sudan occupy the last place in the group without a point.

In other matches played on Wednesday, Malawi beat Ethiopia 3-2, while Angola lost at home 0-3 to Burkina Faso.

Ghana picked their maximum three points with a 3-2 defeat of Togo in Accra, Mozambique and Niger ended play 1-1, while Egypt lost at home 0-1 to Tunisia.