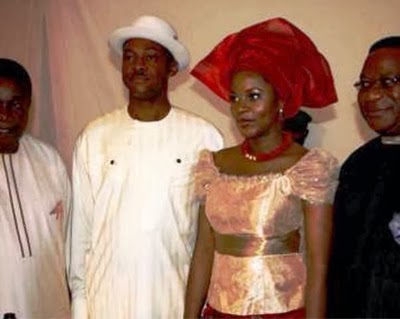 One of the biggest news stories of 2013 was the curious case of Clara Chime, the First Lady of Enugu State. The wife of Governor Sullivan Chime went public with her marital issues, depression and alleged maltreatment by her husband.

She gave an exclusive interview to Channels Television (Watch Below) and also released a press statement via Sahara Reporters. At the time, the public was shocked by her very different appearance as well as the content of the interview and letter.

Now, the First Lady has taken a new perspective. This weekend, she told Daily Sun that she was willing to make the apology to her husband and all Enugu women, having reconsidered her actions which led to leave her marriage and the state last year.

Below is her letter as published by the Sun Newspaper. Click to read the full report on their site.

Her letter reads: “At the deepest of my thought emanated this truth, which I believe is worth to share with the nation because of the ongoing political movement in Enugu State in which my name is attached.

“At the point I wrote to Human Rights Commission and got linked to Falana & Falana Chambers to facilitate in grant­ing me right of freedom from the Enugu Governor’s Lodge, it was my personal decision because then, His Excellency Governor Sullivan Chime and a brother of mine were brain-washed by a psychiatrist who advised that I should be locked in and confided in an enclosure on the grounds that I was sick, which I’m yet to find out; and must see the end of it.

“The psychiatrist presented to the world that I was suffering from mental illness and till date, has refused to furnish H.E. Governor Sullivan with detailed report of his assumed illness assessment.

“My appearance on Channel TV was to debunk some awkward perceptions, and to be seen and heard by the public, which was triggered on the grounds that H.E. Governor Sullivan Chime permitted dehumanising plans that were targeted at me by his enemies.

“I hereby sincerely apologise and take back my words, leaving other things in the hands of God.

“My dearest Enugu women, like you all know, my teachings, right from the onset have been ‘making heaven a priority; and let the truth be told and accepted at all costs.’ Indeed, I plead with you all to for­give me if by chance I was misunderstood, especially going by the manner the media played out my exit. I still remain that your lovely daughter, teacher, wife and mother.

“I must confess that I miss you all, and please you all should acknowledge that my option of taking an exit then was divine, if you carefully listened to my last speech during my last outing in the state (Enugu) or I advise you renew your memory by getting a copy of my speech, then you will ascertain that it was my personal decision, which was divine from God to take an exit; only that enemies played up my exit like there were other motives they had.

“My dear Enugu women, as we all know, the Bible made us to understand that we must always pray for our leaders at all times!

Like I rightly said to you all three years ago, (during Governor Sullivan Chime second term election) that your votes are for H.E. Governor Sullivan Chime, a man who’s zeal and passion are to create good governance and instill virtues of good gov­ernance in his staff. I remember stressing that your votes weren’t meant for any of his staff rather to him, whom you all know his call for service was divine.

“I hereby state that you all shouldn’t mind the detractors who are using my name to gain cheap loyalty, popularity and distrust towards H.E. Governor Sullivan Chime. He still remains who I have always made you all to believe he was (a lovely God fearing good man!). Please, do not hesitate to ride on with him towards any direction he chooses to go.

“H.E. Governor Sullivan Chime still remains President Goodluck Jonathan’s loyal son and all thanks to Mr. President for believing in him till date. My sincere gratitude and loyalty go to the First Lady of Federal Republic of Nigeria, Her Excel­lency, Dame Patience Jonathan, for the new opportunity God used her to bestow upon me.

“Finally, please my family squabbles should be left between Gov Sullivan Ihe­anacho Chime and I, which we too have left in God’s hands. It must seize to be for public consumption. Thank you and God bless.”