The black community in Phoenix, Arizona is expressing outrage over the death of a 65-year-old Nigerian man following his encounter with Phoenix police.

Tribex reports that the man, Balantine Mbegbu, died on the night of October 6th, while in police custody.

The events that allegedly transpired before his death are as follows:

Phoenix police responded to a 911 distress call about a fight at Mbegbu’s home.

According to a police statement, Mbegbu got physical with them when they arrived. They alleged that he spilled some hot liquid on them and kicked one of the officer’s in the groin, and meted out other forms of assault. As a result, the policemen say they were forced to react.

According to his family, the officers’ “reaction” was that “they handcuffed him face-down till he began to foam at the mouth, and rolled him over and attempted several times to sit him up,” and shot him with a taser. 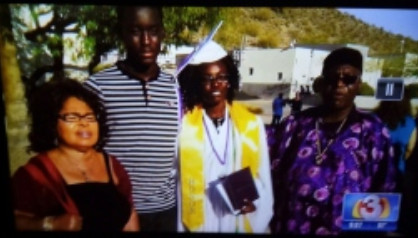 The police statement further revealed that “shortly after being detained, Mr. Mbegbu showed signs of medical distress. Officers immediately recognized this, removed the handcuffs, began first aid, and called for Phoenix Fire to assist.” Paramedics reportedly took him to the hospital, where he died.

The Phoenix community recently held a rally to protest the deceased’s death, describing it as police brutality. Here’s a notice that was disseminated  before the rally:

Phoenix, AZ– Civil rights and political leaders, and community members will rally at phoenix city hall to protest the killing of balantine mbegbu, a 65 year old black man killed by phoenix police on the night of Monday october 6th 2014.

Mbegbu, a retired father of two, was killed in his home by what supporters of his family are calling excessive force and brutality at the hands of police officers. Mr. Mbegbu was tasered to death in his own home.

“We are outraged at the actions that led to this man’s death,” says civil rights leader rev. Luther holland.

“We are marching for justice and to demand an independent investigation into another tragic killing by phoenix police officers.”

The family of Mr. Mbegbu is represented by Phoenix civil rights attorney Sabinas Megwa. “My client’s family and the entire community, people from every race, are incensed about the brutal and unnecessary killing of Mr. Mbegbu,” she said.