There are two sides to every story.

When we published the story of the UK mum looking for her 2 year old daughter, Liya, who was allegedly kidnapped by her paternal grandmother, we hoped our post would at the very least help the mother locate her ‘missing’ child.

We all rejoiced when Liya was found, although there seemed to be missing pieces in the story.

Now Izuchukwu Ehiemere, Liya’s father has come forward to share his side of the story, amidst allegations of abandonment, kidnap and more.

“My name is Izuchukwu Ehiemere and I am the biological father of Miss Liya Tinuke Temidun Ehiemere. To be frank, I met Miss Moronke Fadoju (Liya’s mother) at the University of Hertfordshire, United Kingdom and we began a casual friendship at the time. We were not in a “binding” relationship, it was purely casual. This relationship/friendship did not last up to three months of which I was informed by her that she was pregnant with my child.

Naturally, I was surprised and in doubt but before I could make proper verifications, she had already informed everybody both domestically and internationally that myself and her were having a baby together. Furious at the time, admittedly I must have said some harsh things with which I regret till date but I accepted my responsibility and worked towards welcoming Liya into the world. I went as far as accommodating Moronke for some months as she had been evicted from her house. This idea didn’t go down well with my friends at the time but it was the right thing to do, up until my landlord discovered.

To cut that story short, I remained actively involved even when she got a new place because the baby was fast approaching. I helped with the baby shower party, purchasing the baby cot, baby essentials etc. as well as transporting her to the hospital to give birth, and thankfully I witnessed the birth of Liya. I remained a key figure from Day 1 helping Moronke run errands since she was so weak after birth. I could go on and on about how actively involved I was but the point drew near when I had to return to Nigeria for my NYSC some months after Liya’s 1st birthday. I am sorry if going to serve my country portrayed me as an absent father. It does hurt a lot when Moronke says I never wanted Liya and I have never been there for her. If I was never there for Liya, she had the right to name Liya whatever she deemed fit and deny me parental responsibility. There is a reason why her surname is Ehiemere.

Given that I have PR (Editor’s Note: Parental Rights) to Liya, I share equal responsibility over Liya unless Moronke has a court order stating otherwise. During the period of my return to Nigeria, we had an agreement that the best way to help Moronke as a new mother, was by both mothers from the maternal and paternal side taking intervals to travel to the UK to babysit Liya and enable Moronke go back to University. An agreement both families as well as Moronke were very receptive to.

Labelling my mother as a squatter who relied on her assistance was very wrong. My mother handled every expenditure in Moronke’s household within her stay there and assisted to the best of her ability. (Bank Statements available as proof to that effect). My mother did not have to come to the UK but she did purely out of love, twice as a matter of fact. 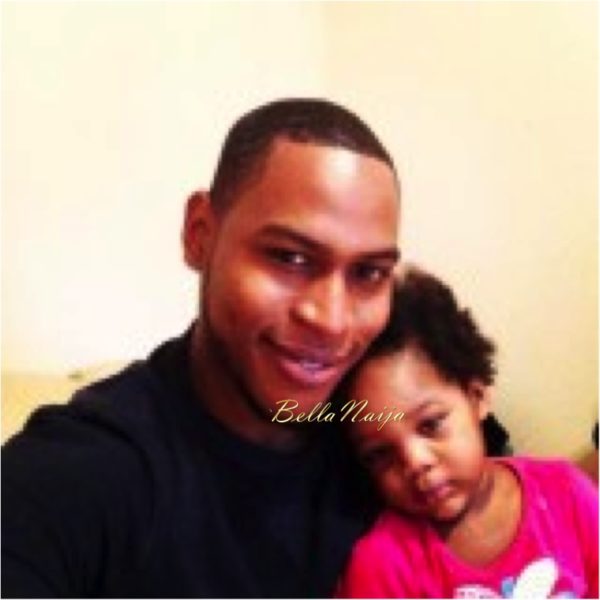 During her stay, things did not pan out well as my mother observed a lot of traits and behavioural patterns that could be of potential harm to the proper development of Liya. For good reasons, confidential information would not be disclosed here, but there is adequate evidence to prove our genuine concern for Liya’s welfare and wellbeing in the UK. Social Services were also involved and would know best. As a result of the potential risks to Liya’s welfare and wellbeing discovered, I granted my mother Power of Attorney to act on my behalf with matters regarding the welfare of Liya as I was not happy with the situation at hand and the best outcome was for Liya to be brought to Nigeria. Ronke’s family was informed that same day Liya arrived Nigeria including our exact location. Putting up that Instagram post on missing child was not called for, as they were duly informed. It seemed like a deliberate act to sabotage the good name of my family and indirectly hurt my mother. 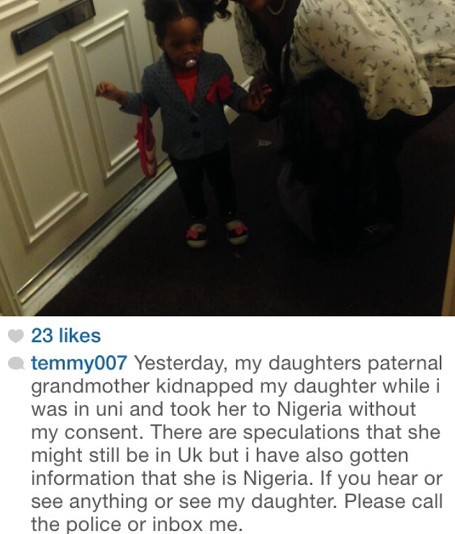 Kidnap is a harsh allegation and it was uncalled for in this regards. The blogs and messages were put up to generate undue sympathy and rage. They were too erratic. She remained in contact with Liya too, therefore I do not understand her claims of not being allowed to speak with Liya.

Every decision that was taken was in the best interest of my daughter, Liya. She knows her father just as well as her mother, and I am not a stranger to her. Liya was never traumatized during her stay here, as a matter of fact, she was extremely happy to be reunited with her father in a cleaner and stable environment. There have never been issues between both families and the stories portrayed do not justify that. We remain as diplomatic as possible and would not result to name calling or war of words because we want peace to exist. I have no doubt with the events that have taken place and the publicity generated, more watchful eyes would be placed on Liya and her welfare going forward. This is all, we as a family have always wanted.”

We’re grateful to Izu for sharing his side of the story with BN.

We do hope the family works towards healing the wounds created by this rift, especially for Liya’s sake.