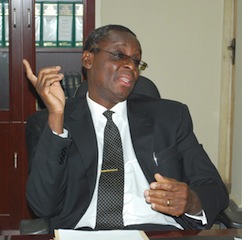 Nigerian Law School authorities are speaking out on the mass failure of law school students in the 2013/2014 August Bar 2 final examinations.

Secretary to the Council of Legal Education and Director of Administration of Nigeria Law School, E.O Max-Uba, told PM News that the high failure rate was only among students who were re-taking the exam.

She said that over half of the students who were taking the exam for the first time (57.01%) passed.

Max-Uba further stated that the failure rate amongst the re-sit candidates was because many of them were either working or based outside Nigeria.

In addition, she expressed that most of the students protesting the poor results were the ones who “sat for the examinations four times without success because they refused to participate in revision classes organised for them prior to the examinations.” She also dismissed allegations that Director General of the Nigerian Law School, Olarenwaju Adesola Onadeko or any lecturer was responsible for “marking down students,” as examination papers are not marked by those who set the examinations.

Speaking on whether the results would be reviewed, she noted that candidates are free to apply for a review in accordance with rules set by the Council for Legal Education. Furthermore, she encouraged candidates who failed the exam to re-sit next year.

She also revealed that as a result of the poor performance of the students, the Board of Studies of the Council of Legal Education has mandated that henceforth, all re-sit candidates must attend a minimum of eight weeks compulsory revision classes at the Law School.