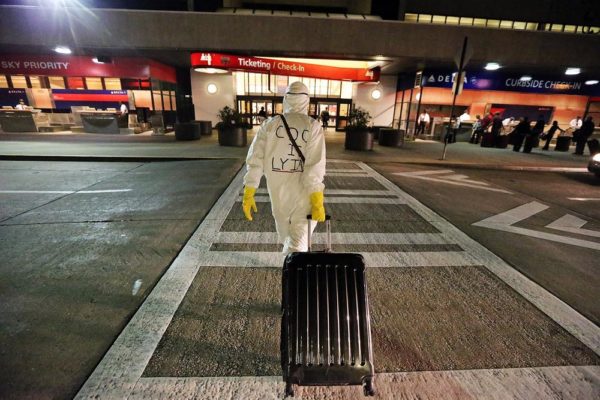 An official of the White House said on Friday in Washington that five international airports in the U.S. had initiated Ebola screening on passengers arriving from Guinea, Liberia and Sierra Leone.

He said the screening began on Thursday in Chicago, Atlanta, Newark, New Jersey; and Dulles International Airport outside Washington.

The official added that screening would commence on Saturday at New York’s John F Kennedy International Airport.
He said that ban had become imperative because it was estimated that between 100 and 150 travelers flew in to the U.S. from West Africa daily.

He said there were no direct commercial flights from West Africa to the U.S. but passengers usually arrived after transferring in Europe.

According to him, 94 per cent of them from the affected countries travel through the four U.S. airports.

He said the screenings required passengers to complete a travel questionnaire, provide contact information and have their temperature checked for fever, the first Ebola symptom.

He said after the process, passengers must undergo additional screening if they were deemed high risk.

“Recently 13 out of 155 passengers coming from West Africa required an additional interview, out of those, eight passengers were withheld at the airport, examined and have since been released,’’ he said.

Despite the screenings, calls mounted for a travel ban from West Africa from Members of the Congress, after a hearing to question U.S. health officials about the spread of Ebola.

Representative Fred Upton, from Michigan, condemned the measure put in place, referring to it as a fail-safe system.
He argued that a ban was needed because a person might not exhibit symptoms for up to 21 days after exposure to the virus.

Tom Frieden, Director, Centres for Disease Control and Prevention (CDC), told lawmakers he was not in favor of a travel ban because he believed it was easier to monitor travelers under the current system.

“If passengers are not allowed to come directly, there is a high likelihood they will find another way to get here, and we won’t be able to track them as we currently can,” he said.

Debra Malac, U.S. Ambassador to Liberia also spoke against a travel ban, which she said would not be effective.

“Isolating these countries is not the way to address the epidemic,” she said.

Western nations need to be able to get people and resources and supplies into the affected regions.