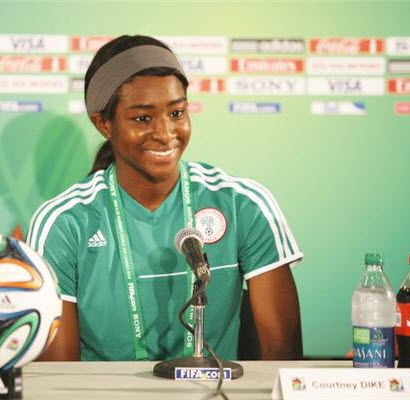 Courtney Dike,  a 19-year-old who plays for the Super Falconettes, Nigeria’s Under 20 female football team has rejected the $7,000 paid to her by the Nigeria Football Federation (NFF) for participating in the 2014 U-20 Women’s World Cup, Nigerian Watch reports.

She is said to have refused to accept the money because she felt that playing for Nigeria was enough reward.

“When we called her mother to confirm the delivery of the allowances, she declined it and insisted that the opportunity of playing for Nigeria was all the reward the family needed,” said Sanusi Mohammed, the NFF’s head of competitions.

Reacting to the news, Dilichukwu Onyedinma,  head of the Nigeria Women League board, said  “She is a star and patriotic Nigerian who put service to her fatherland above money. The minister is aware and we will push the act before the NFF so it can inspire many others. Doing this with the backing of her parents, Courtney Dike should be applauded and perhaps celebrated.”

Chimamanda Adichie, Lanre Da Silva Ajayi, Mo Abudu, Oby Ezekwesili & Others are the 10 Nominees for YNaija! Person of the Year 2014

British-Nigerian Man in UK Banned from Work over Ebola Fears