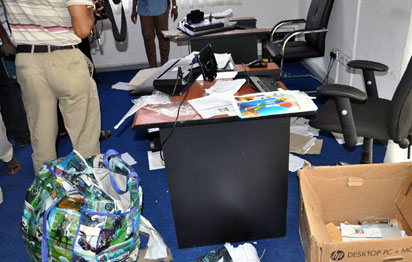 The Department of State Services (DSS) on Sunday said it has arrested some suspects in Lagos, allegedly cloning INEC’s Permanent Voters Card.

A statement issued by the spokeswoman of the service, Marilyn Ogar in Abuja said that it raided a building located at No.10, Bola Ajbola street, Allen Avenue, following a petition it received alleging “unwholesome activities’’ there.

“The petition alleged that those behind the activities were cloning INEC Permanent Voters Card with the intention of hacking into INEC data base, corrupting it and replacing them with their own data.

“Based on this information, the service placed the building under surveillance and having been convinced that some unwholesome activities were going on in the building, it undertook a raid of the premises.

“In the process, some persons were arrested, while a Server, three hard drive and 31 Ghana must go bags of hard copy document were recovered and taken away for further investigation’’, she said.

According to her, the said location had no sign post indicating whether it was a private or government office.