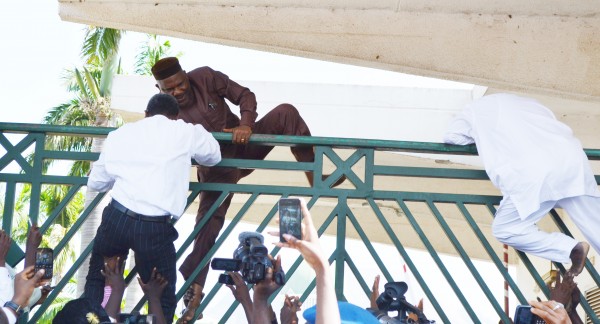 Femi Gbajabiamila, House of Representatives Minority Leader, was one of the lawmakers who scaled the National Assembly gate during the pandemonium that took place at the premises last week.

Speaking on the incident via a statement signed by his research and media assistant, Gbajabiamila stated that he climbed over the gate to save democracy, Daily Post reports.

An excerpt from the statement reads:

What happened in the National Assembly yesterday will forever live in infamy. I never thought I would see the day when I would be forced to go over the assembly gates where I work to gain access into the chambers. But then our democracy has to be saved…

It was pretty clear the presidency in spite of a court injunction wanted to do something sinister and illegal.

They perfected the plot to stop the Speaker and the opposition leader from gaining entry. My members were already in chambers waiting for me to come in so as to provide leadership and direction. Most of them had gone over the gate too. I had to do the needful to save our democracy. We thank God we foiled their evil machinations. We will continue to be vigilant.

Wow! Denrele Edun Shares how He was Robbed at Gunpoint by 7 Men who took His Credit Card, Passports & MAC Powder

I Am the Best Leader Nigeria has Ever Had – Pres. Jonathan