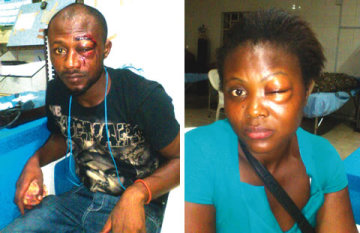 A married couple was left with severe injuries after being tortured by a policeman last Wednesday around Lekki roundabout, as they were heading to their Parkview Estate home in a taxi.

Ejeh Smith, 29, and his 26-year-old wife Grace, are currently in the hospital receiving treatment as a result of the incident, Punch reports.

The police officer who physically abused them was part of a seven-man team who were patrolling the area around 10 p.m. on that day.

According to reports, the team stopped the taxi and demanded that the driver open his boot. The driver Ndubuisi Iheaka obeyed the command, and they subsequently ordered him to show his driver’s license.

As Iheaka was bringing out his license, one of the policemen proceeded to shine their torchlight on the faces of the passengers – The Smiths. Grace then requested that the policeman should stop flashing the torchlight on them, as the inner light of the vehicle was on.

Taking offense, the policeman ordered the couple to get out of the car. An argument ensued, and the officer seized Ejeh by his trousers, and Grace approached him, pleading with him to stop harassing her husband.

The policeman reportedly slapped Grace, and then punched her husband. He was wearing a ring, and so the punch inflicted a deep cut on Ejeh’s face. After punching him, the officer is said to have used the butt of his gun to hit him in his eye and face. Afterwards, reports states that he dragged Grace on the road and stepped on her tummy.

If I was pregnant that night, I would have lost my pregnancy. I was only trying to pet him to leave my husband since he did not have business with us. I told him to face the cab driver and leave us alone. “The other policemen were just looking at him while he dragged me on the ground. A man riding a tricycle at the time was the one who rescued me. He said the policemen must call their Divisional Police Officer or else he would not leave the scene,” Grace said.

The Ikoyi DPO Aisha Haruna eventually arrived at the scene and requested that the couple accompany her to the station to give their statements. However, the couple insisted on going to the hospital for treatment first – which they did, and paid for by themselves.

According to Grace’s account, Haruna seized her mobile phone, and asked one of the investigators to delete all the video and photo evidence that had been recorded during the incident.

“Even my personal data were deleted. And when I asked the DPO why she did that, she said we deserved the treatment we got. She said she would have locked us up in the cell if not for our injuries. She said we did not know how to talk,”  Grace said.