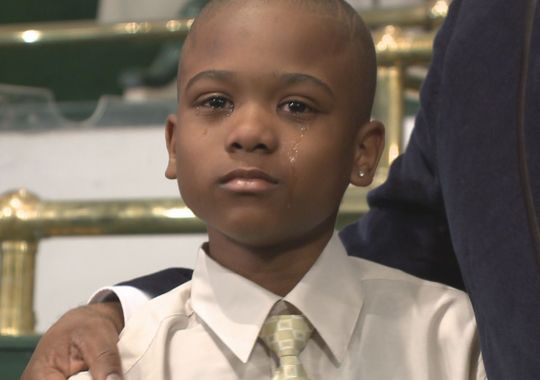 This incident happened last year, however; many are still talking about it.

A 10-year-old African-American boy named Willie Myrick (he was 9 at the time) was kidnapped from the front yard of his guardians’ Atlanta home by an unidentified man in March 2014, after luring him with money Independent UK reports.

Myrick’s captor forced him to enter into his vehicle, and began a 3-hour journey to an unidentified destination.

His captor reportedly got extremely irate and kept cursing at the boy, telling, him to stop singing, but Myrick ignored him and continued to sing for three hours straight.

Exasperated, the kidnapper let Myrick out of his car unharmed, in the East Point area. Overjoyed to be free, he then ran to his godmother Codetta’s house, as she lived close by.

Speaking on his ordeal, Myrick said “If you praise the Lord he will help you in mysterious ways.”

According to CBN, he was raised by atheist parents but his godmother frequently took him to church where his passion for God was born and grew strongly.

When he heard the news, Walker traveled from New York to Atlanta to see the boy.

“It’s just emotional to me because you never know who you’re going to touch…I just wanted to hug him and tell him I love him…I really believe that God spoke through me to save that young man’s life.”

Here’s the music video for the song, “Every Praise.”

So what do you think? Was Myrick saved by divine intervention? Or was it just plain luck?