Queen Ahneva Adegeye: "It’s Not Easy to Be One of King Sunny Ade’s Many Wives" 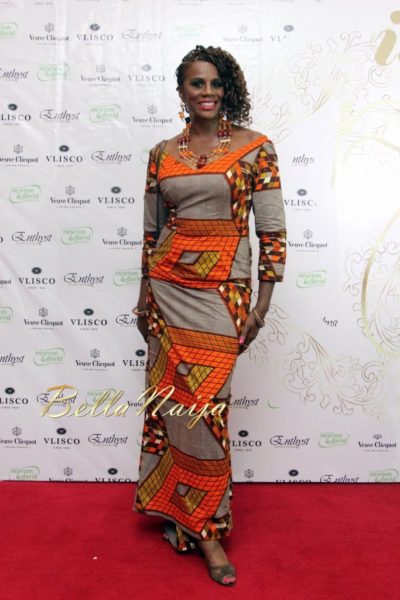 King Sunny Ade is one music legend who has been able to maintain his home with many wives.

One of his wives, an African-American woman, Queen Ahneva Adegeye has opened up about what it’s like to be married to KSA – she also touches on the fact that she came to Nigeria as a result of her love for Africa.

In an interview with Punch Newspaper, she talks love, fashion, Africa and more.

On fashion: I have always loved fashion and African fashion in particular. I was the President of Black Students Union when I was in high school. One of the mandates for my presidency was to create events that would help connect African Americans to the African heritage. It was mandatory for you to wear something African to every event. I found myself making all sorts of African wears and dresses.

On returning to Africa: I always had this drumming in my ear even when I was a little girl. I would always hear the sound ‘boom boom boom’ in my ears. It was the sound of a drum. It was an African rhythm. I would tell my parents about it. My father told me one day that my ancestors were the ones calling me back home. When I first got to Nigeria, I knelt down as soon as I stepped out of the aircraft, I prostrated and I kissed the ground. I was so drawn to being home and I was happy I kissed the ground. I went to the slave dungeons in Cape Coast, Ghana. I was there with the Association for Study of African Classical Civilisation. We had a symposium and part of our tour was to go to the slave dungeon. The women among us went to the prison where the females were kept. There was a door of ‘no return’ that all of our ancestors went out through when they were sold. They said anybody who went out from that door never came back home. I was supposed to go with everybody else after that session but I didn’t.

On meeting KSA: I was his designer. I was making all his wears. Anytime he came to the US, I would dance on the stage and put a crown that I designed for him on his head. We just had something going on.

On marrying KSA: I didn’t choose him, he chose me. We chose each other. Everything is in divine order. When my girlfriend said I should follow her to watch a juju artiste performing at UCLA, I was mesmerised. I hadn’t heard of him before. He was cute and he had dreamy eyes. He spoke the African language and I was blown away. My friend said I should come back stage and meet him and I went. It was a natural connection. I wasn’t pushing up on him anyway. He so much captivated me and got me going.

On polygamy: If I had thought about it real strong and real long, I probably wouldn’t have married him. It is not the easiest thing to be ‘one of’ but you love who you love. He has a beautiful spirit and a wonderful heart. You just can’t help but love him. He has a way of treating all his wives like queens. When I am around, I feel like the only one and I am sure when the others are around, they feel like the only one. That is the magic for a man who has learnt how this polygamy thing works. The only thing I cry about most nights is being by myself a lot. He is absent all the time because he is always on the road and doing his music. That is what he loves and I cannot mess with that. It is what makes him happy. He is not possessed by any of his wives; he is possessed by his music. That is the truth. That is the only thing that I know that he lives for. He loves his music. I go to his shows and when he starts praising me, I feel on top of the world. I love it when he does that.

On the other wives: We are very cool. There are some I consider myself ‘cooler’ with than the others. Their kids are like mine. We love one another. They understand that I am not getting more than they are getting. We try to be as supportive as possible; there is no hate. There is no foul word or ugly look. We always come together when we have to. Sunny is endeared by what he does. Nigerians love him as much as we do. We don’t ever think we would compete with his love for his music. I try to keep myself busy so I don’t feel too lonely.