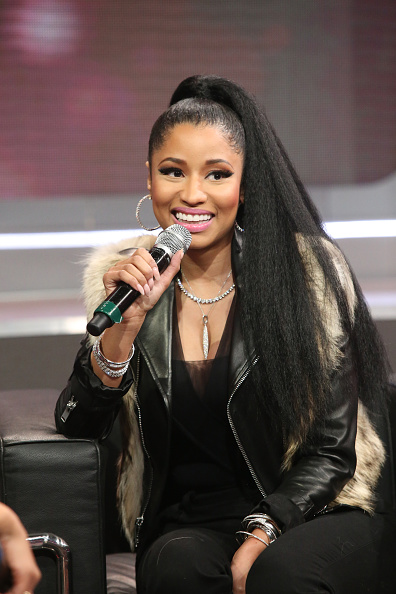 Nicki Minaj is currently on tour for the promotion of her Pink Print album and recently she had an interesting interview with BBC radio.

In the interview the YMCMB artist spoke about her hit song ‘Truffle Butter’ and why she had beef with Tyga over it. She also talks about her relationship with Meek Mill and shares her thoughts on Chris Brown’s baby drama.

On Meek Mill: I mean, you know, we’re just super-compatible. And we just be having fun together. You know how that goes — when the kid do it, the kid gets it done — know what I mean? (purrs).

On Choosing Sides with Lil Wayne & Birdman: I don’t think it’ll ever get to that point. People know that I love Wayne and I have loyalty towards him, but I love Baby too. I’m very close to Baby, and I don’t think people know that. I am banking on the fact that they’re gonna work this out like family. They’ve gone through things before just like family does and it is what it is. They gonna get through it. I’m not even gonna think that way.

On Tyga and Truffle Butter: The song was on my album and you know… we don’t know how, but it magically ended up in Tyga’s hands. I told him no…that’s my song,  I’m going to have Drake on it. Then it magically leaked with him on it after I told him not to put it out. I thought it was a little bit disrespectful, because I always showed him love. I had always done stuff with him, took him on tour with me. He texted me after and he apologized. And said ‘you are always there for me.’ I’m a very forgiving person I feel like people, we make mistakes. As long as you can come to your sense after the fact and remember who looks out for you, and who was there and who supports you. Then it’s all good. He’s entitled to make a mistake every now and then.

Listen to the full interview below.

Lagos through His Eyes! Watch Brymo in a Mini-Documentary ‘1 Pound’