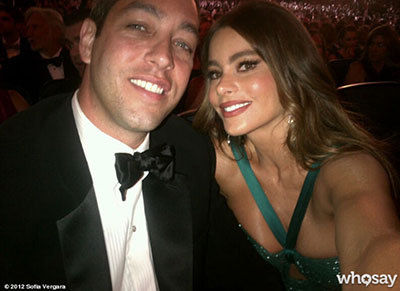 He planned the proposal in style, by whisking her, her son, her costars from the hit ABC show, including 107 friends to Mexico for her 40th birthday.

They were one of the most loved couples on the red carpet. There were numerous designers sending her sketches for a wedding dress. But 2 years later in May 2014, the couple split.

Fast forward to 2015, news broke out that in 2013 Sofia and Nick planned to have children, so they decided on an assisted reproduction method – the use of embryos (her eggs and his sperm).

The couple agreed that the frozen embryos will be destroyed if one party dies, but did not consider their options if they split up.

Nick claims that since Sofia has moved on and is engaged to actor Joe Manganiello, she wants to destroy the embryos.

Her rep released a statement to People Magazine that Sofia has no plans to destroy the embryos but wants to freeze them indefinitely.

“The claims made against Sofia Vergara by Nick Loeb are uncredible and hold no merit,” Sofia’s attorney, Fred Silberberg, said in a statement. “Vergara has never wanted to destroy her embryos.

The agreement signed by Vergara and Loeb in November 2013 when the embryos were created states that no unilateral action can be taken with regard to the embryos unless both parties consent.

Furthermore, Vergara has never suggested that she wished to have the embryos destroyed. She has always maintained that they be kept frozen, a fact of which Loeb and his counsel have always been aware, despite Loeb’s statements to the contrary.

Vergara, who has happily moved on with her life, is content to leave the embryos frozen indefinitely as she has no desire to have children with her ex, which should be understandable given the circumstances.”

Nick then released a statement to US Magazine today;

“I have always strongly believed that life begins at fertilization and that every embryo is a life on the journey towards birth. I created these two female embryos with the purpose of taking them to term and not destruction, because I have always dreamed of being a father.

I have previously offered to waive any parental or financial responsibilities or obligations on the part of my ex, and to even give her the opportunity to be involved with the child in the future, should she change her mind. I take the responsibility and obligation of being a parent very seriously.

Creating an embryo in the natural way can lead to parenthood obligations, even where a man doesn’t want to become a father. Where a man does want to become a father, and wants to impose no obligations on the other party, he should have that corresponding right. However life comes to be created, it should have no determination on either the rights of wanting to be or the requirements of having to be a parent.”

The ongoing discussion about the situation is that people think that Nick has a right to those embryos just as much as Sofia because his DNA is involved, and Sofia should have made sure documents were put in place if they split in the future. Nick is a Republican and believes that life begins at conception.

Another side of the discussion is that people think Sofia has moved on and is engaged to Joe, and Nick is just trying to hurt her with the story of the frozen embryos.

What’s your take? How should it have been handled? Let’s Talk About It!

Omonike Odi: 8 Things You Need to Know About the Ghost of the Ex

New ThreeSum Episode! “When you break up with your boyfriend/girlfriend, do you cut off their friends & family too?”