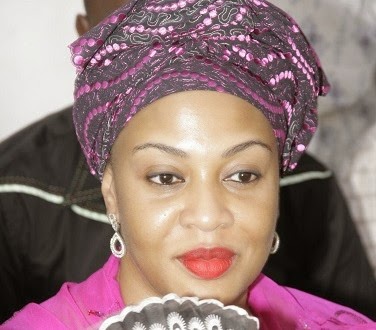 Senator Gbemisola Saraki, who was a Kwara State PDP governorship aspirant, has decamped to APC.

Here is the statement she released announcing the news, as reported by Leadership:

I come before you for a formal declaration of our move to the All Progressives Congress (APC). This is not to underplay the reality that we have joined the APC a fortnight ago, just before the Presidential and National Assembly elections, but I believe I owe you the obligation to formally announce this move to you as a deep respect for your love and your support of the GRS Movement over the year.

This decision is a product of wide consultations with members of the GRS Political Family that cut across all the sixteen (16) Local Government Areas of the state on the one hand and the leadership of APC on the other. It was in furtherance of this that on the eve of the Presidential and National Assembly elections I had asked all my supporters to troupe out en masse and vote for all the candidates of the APC. Let me seize this opportunity to thank our supporters for heeding the clarion call and congratulate them as well as all members of the APC for a historic victory.

Several friends and associates have asked me why we moved and I have responded by telling them that the reasons are not far fetched; the reason is as important as who we are as political organization. Our ideology finds roots in championing the cause of the grassroots; upholding equity and justice, and especially the vision for a meaningful and passionate leadership. We believe that a true leadership must be predicated on certain values that must be sacrosanct, which must also follow the sanctity of democratic ethos.

When we joined Kwara PDP, it was for the main reason of enlarging these inalienable values and re-engineering the processes of leadership through the party in order to mirror the true aspirations of Kwarans. Considering the circumstance of the party at the State level, we knew we had to work harder and make sacrifices to deliver a party that would represent the yearning of our people.

However, the ensuing pattern of animosity within PDP was strongly placing our ideology on the cross hair of political attacks by elements within the party. Furthermore, the party was evidently hijacked from evolving into a political force that can accommodate the broad interests of the people but allowed to tarry to the selfish ambitions of some elements within its fold. This rubbished the sanctity of democratic ethos of any true leadership and frustrated any semblance of cohesiveness of the party. Yet, we worked assiduously to instill decency and political maturity necessary to force an essential sense of direction. We failed. Instead, these elements within the party developed an obsession to waging verbal and psychological attacks on the GRS Political Family and our ideals. The focus was to frustrate our membership of the party, arguably, one of, if not, the largest within Kwara PDP.

Thus, instead of presenting pragmatic solutions and workable templates for developing Kwara, the party abandoned presenting alternative policies and went on meaninglessly attacking and castigating not only the opposition, but even those within the party, especially my very self for no other good reason other than the accident of my birth; a birth of which, by the way, I am very proud of.

The last straw however, was the failure of the PDP to respect the place of women in politics as a basis of an inclusive template of leadership. Like no other time in our collective struggle for equity and fair play have women suffered so much relegation in the political system in the country and especially in the state. “Yet we have all had to endue the patronizing campaign adverts of the PDP’s self-proclaimed “generosity” towards women; the self patting of its achievements of the number of women appointed into the President’s cabinet.

True representation starts at the grassroots and builds up. Women are seeking true representation at all levels and most especially into elected positions thus doing away with the demeaning modes of lobbying that we women are subjected to. The APC has shown that it believes in ensuring that women are treated with respect and dignity and assisted to excel in the political arena as shown by the emergence of the Taraba State Gubernatorial Candidate.We therefore have come to the sad realization that the seeming marginalization of women in the PDP is deeply embedded in the party system and leadership and all attempts to cause a change from within have been met with brick walls and blatant prejudices against women leadership. The choice was therefore clear – a constricted, backward vision of Kwara, which the opposition represents, or a bold step into the future that guarantees fairness, justice and hope.

Thus, the move from the PDP into the APC was an easy decision for us considering our history with PDP and our vision for our future.

After wide consultations, we found in APC a platform that mirrors the ideals of our political family both in content and context especially with under the leadership of General Muhammadu Buhari. We are assured in the promise of the APC for a new Nigeria. We are confident in the commitment of the President-elect to social justice, rule of law and economic posterity for all.

I therefore call on all my supporters from across the state to take what we have started a notch further by going out to register with the All Progressive Congress Party, APC, and to work actively for a resounding success of the APC in the forthcoming polls.

Given the choices and the times, I am convinced beyond doubt that Kwara will be better served by the APC-led government in the state.

Without any doubt, I trust that this opportunity will bolster the ideal of good governance and a social vision that raises continuity over epileptic development, and a political vision, which rewards loyalty and consistency. It is our hope that the victory of the APC on Saturday will herald improved frontiers for the socio-economic advancements of the state. So help us God.