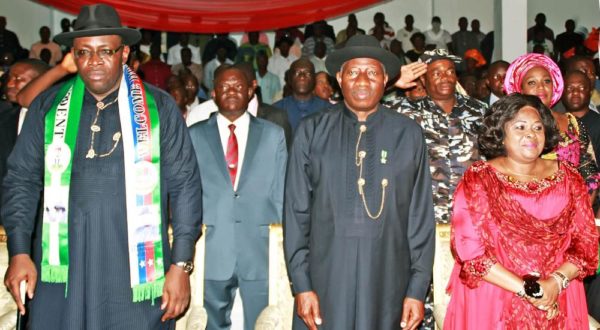 FORMER PRESIDENT GOODLUCK JONATHAN (2ND R), HIS WIFE PATIENCE AND
GOV. SERIAKE DICKSON OF BAYELSA, AT A RECEPTION IN HONOUR OF FORMER
PRESIDENT JONATHAN BY THE OTUOKE COMMUNITY IN YENAGOA ON FRIDAY.

Former President Goodluck Jonathan on Friday in Yenagoa said he remained grateful to Bayelsa people for the support he enjoyed during his political career from 1999 to date.

Jonathan, who expressed his gratitude at the civic reception organised in his honour by Bayelsa government, said that he was honoured to have been found worthy of public service.

He expressed appreciation to the state government for organising the civic reception, adding that he would dedicate the remaining part of his life to peace building across the country.

“Having befitted so much from the rare privilege of serving, I shall dedicate the remaining part of my life to peace building in all parts of Nigeria. I will urge all to support the new administration to develop Nigeria and work with the state government to develop our own state,” Jonathan said.

Speaking earlier, Gov. Seriake Dickson said that the administration organised the reception to express appreciation to Nigerians for giving Jonathan the opportunity to lead the country for the past six years.

He said that the state was receiving the former president with mixed feelings of gloom and gratitude.

He said that the period was a trying time for the Niger Delta people but said that there was hope in the horizon.

“We are down but not out and for those who are happy at our situation that we shall rise again,” Dickson said.

Speaking on behalf of the traditional rulers, Alfred Diette-Spiff, Chairman of Bayelsa Council of Traditional Rulers, said that serving the country as president was a rare privilege.

“The great sage Chief Obafemi Awolowo wished to be president of the country for only one day, but our own son was president for about 3,000 days,” Diette-Spiff said.

Among those in attendance were Akiplayi community social groups and their elders, Ogbia Youth Vanguard (OYV) were in attendance to welcome the former President.

Ijaw Youth Council (IYC) were among those that welcomed the former president in his home town.

Ohane-eze You Congress (OYC) were also in attendance to welcome the former president.

The reception was also attended by the Peoples Democratic Party Women Forum (PDPWF).