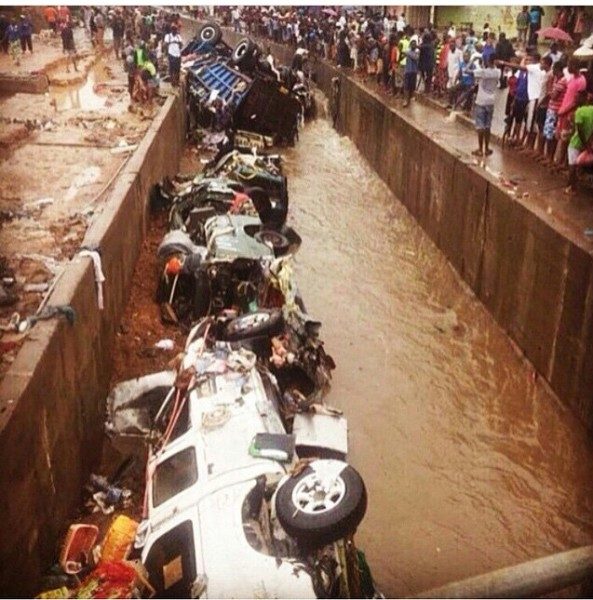 Ghana on Monday started observing a three-day national mourning for people who lost their lives through flood and fire disasters in the capital, Accra.

The double disaster claimed over 200 lives and destroyed properties worth millions of U.S. dollars last Wednesday.
The inferno followed hours of prolonged downpour that led to power outages in several communities.

A large number of the victims were believed to be taking shelter at a fuel station to escape the downpour when an explosion occurred.

Hundreds more also sustained various degrees of injury and are receiving treatment at different hospitals in Accra.
President John Dramani Mahama announced the three-day national mourning after a crisis meeting of the national Security Council moments after the incident.

Flags will be hoisted across the country up until Wednesday and government is encouraging Ghanaians to wear black attire and red armbands during the period.

The three-day mourning will end on Wednesday with a memorial service for the departed near the site of the fire disaster at the Kwame Nkrumah Circle to be attended by Mahama.

“As we go about our work and duties during the three days, let us remember the victims and pray for their souls. Let us also pray for strength and comfort for their families and friends,” Edward Omane-Boamah, Minister of Communications, said in a statement.

The government has released 50 million Cedis, approximately 15 million dollars to support victims of the flood and explosion.

Mahama said after visiting the accident scene that drastic steps were necessary if the country was to permanently address the perennial flooding.

“We will intensify efforts to expand and modernise our drainage,” he said.