The Economist Describes Lagos as a City Characterized by "Crime, Corruption & Motionless Traffic" 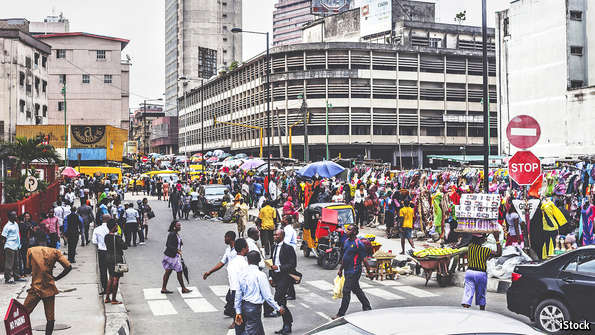 The Economist has some interesting things to say about Nigeria’s “Centre of Excellence,” Lagos.

In an article titled Learning from Lagos, the publication highlights the city’s purported bad aspects, and lauds it for improvements being made.

FOR a city that dubs itself the “centre of excellence”, Lagos has a lousy reputation. The mere mention of Nigeria’s commercial centre conjures images of crime, corruption and motionless traffic. The bodies of people run over in car accidents can be left on the street for hours and commuters in even the poshest parts of town are sometimes caught in shoot-outs between robbers and policemen. Little wonder then that in a ranking of the “liveability” of 140 cities by the Economist Intelligence Unit, a sister company of this paper, it sits in the bottom five. The besieged Libyan capital Tripoli scores higher, and war-threatened Damascus only fractionally worse. Its citizens are also an unruly lot: men urinate on the don’t urinate signs, people hawk by the don’t hawk signs and loiter by the no loitering signs…

Yet the city is a lot better now than it was two decades ago. Bola Tinubu, who became the governor of Lagos State when civilian rule was restored in 1999, remembers taking over a “slum”. “The traffic was chaotic. The infrastructure was disintegrating. There were mountains of refuse all over,” he recalls. “People were being murdered. Armed robbery was rampant. Dead bodies were picked on the street on average 10-15 times every week. There was no control of any kind.”

Mr Tinubu and his successor as governor, Babatunde Fashola, both say their efforts to reform were often frustrated by the PDP-led federal government. It failed to upgrade the main roads in the city that were under federal control, including one leading to West Africa’s biggest port. It delayed approval for an important train line that the state government was willing to pay for. “I don’t want to be understood as recriminating,” Mr Fashola says, “but I know things could have been better.”

Instead of relying on Abuja for funds, Lagos learned to generate its own. It created passable systems to monitor its own spending and squeeze taxes out of citizens not known for their eager compliance with such things. Internally generated revenue has risen to 23 billion naira ($115m) per month, from almost nothing a few years ago. That still amounts to only a few tax dollars per person. But the state has been able to borrow against that income to finance projects such as a much-needed bridge linking the upmarket areas of Ikoyi and Lekki. Moreover, its reliance on local tax collection has forced it to improve its services in order to attract businesses.

And in this regard it has done well. The state produces about $90 billion a year in goods and services, making its economy bigger than that of most African countries, including Ghana and Kenya. Much of Nigeria’s industry, which once thrived in the north, can now be found in the suburban manufacturing estate of Agbara. Cranes hang over the city and land is being reclaimed from the sea as developers rush to satisfy the vast appetite for property…

Read the entire article on www.economist.com