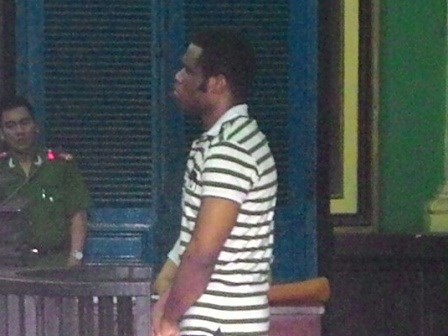 A Vietnam court on Monday reduced a death sentence previously handed to a Nigerian man named Ejiogu Benjamin Ikechukwu for drug trafficking. The sentence has been reduced to life imprisonment.

According to Thanhniennews, Ikechukwu, 33, had nearly 3.3 kilograms of methamphetamine smuggled in metal tubes and a laptop charger in his luggage as he flew to Tan Son Nhat in June 2012.

The 33-year-old said he only planned to go to Vietnam to buy clothes to resell them in Nigeria and had no idea about the drug in his luggage.

He said a man asked him to carry the tubes and the charger to Vietnam and someone would pick them up.

A Ho Chi Minh court in August 2013 sentenced him to death, but he appealed the verdict.

The People’s Supreme Court then canceled the verdict, ordering a new investigation.

Investigators could not track down the people who had used him as a drug mule.

Those convicted of smuggling more than 600 grams of heroin or more than 2.5 kilograms of methamphetamine in Vietnam face the death penalty.

The production or sale of 100 grams of heroin or 300 grams of other illegal narcotics is also punishable by death.