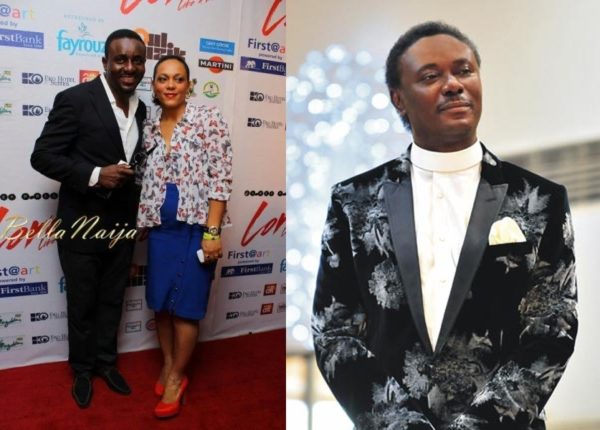 If you have not been keeping up with Nollywood actor Emeka Ike and his wife of 15 years, Suzanne Rero Ike, here’s a quick summary.

Suzanne reportedly filed for divorce a couple of months ago and it surfaced in her court testimony that she had allegedly suffered emotional and physical abuse for years.

Emeka Ike refuted the reports and he denied ever laying a hand on his wife but admitted that his wife has left their home. He appealed for her to come back and explained why he cannot be a wife beater.

He has now released an official statement where he tries to pin-point the cause of the marital issues while also categorically stating that he has never laid hands on his wife. He also mentions that certain influences might have added to the breakdown of his marriage.

Read his official statement below.

The lawyer Chris Okotie hired for my wife is also frustrating every attempt I make to resolve the matter peacefully.

I want people to look into this issue critically. I’ve never beaten this woman in my life. When she ran out of home, I called my pastor and they took us for counselling. For one week, I was begging her every day; I would go home alone and she would go home alone as well.

At a point, pastor asked us to write five things we like and dislike about each other. The pastor said that maybe we could work it out. I wrote mine, she wrote hers and she never said there that I used to beat her. I still have that document with me. She gave me what she wrote and I gave her what I wrote. If I used to beat her, she could not have left it out from that then. Any man that beats a woman is a coward. I know that someone somewhere must have done something to her. How can I beat a woman I adore so much? I love my family and this is very unfortunate. Her children have been begging her to come home, and she has refused.

There was a time I accused her of bringing men to my house. I mean, which woman will wake her husband up in the middle of the night and said to him, share your property I want to get my share now from what you have? Tell me, which woman will do that if not acting under a spell?

There was a time I travelled and she closed down my school and sent all the students away. So, there is a lot to it, other than the allegation of battery against me and I want the whole world to know. My name is precious to me and I don’t want anything to drag it in the mud.

Pastor Chris Okotie just absolved my wife into his church without making any effort to get in touch with me. If as a pastor, your church member is having issue with her husband, and you failed to do anything to resolve it, what kind of pastor are you? When I called him, he refused to pick my call. He also failed to react to a text message I sent to him. Is that a man of God? Even, if you have a police case, they will make effort to hear from you before taking a position, not to talk of the church.

When we went to court, I told my wife that I’m interested in amicable settlement of the matter, and that I still want her back. But she refused. Even, if you don’t want me, what of your children, I asked her and she still would not listen to me. I want the whole world to know because there is a lot of misinformation out there. The lawyer which Okotie hired for my wife is also frustrating every attempt I make to resolve the matter peacefully.

Even if the couple decide to split up, we hope they can resolve their issues amicably especially for their children.