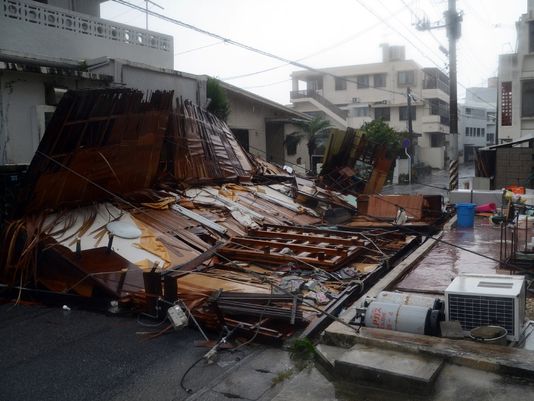 A powerful typhoon hit Taiwan and south-western Japanese Islands on Monday leaving thousands of families without electricity and water supply, the Japan Meteorological Agency reports. The typhoon, Dujuan pounded the Japanese islands after hundreds had evacuated their homes.

As at 6 p.m. (0900 GMT), the eye of the storm was about 90 kilometres west of Yonaguni Island, travelling west-north-west at 25 kilometres per hour.

The season’s 21st typhoon had maximum sustained winds of 180 kph and gusts of 252kph,’’ the agency stated.

However, it added that Rail services and some flights were cancelled.

Taiwan Power Company said the storm had cut power supply in some areas, while over 600,000 families were left without electricity.

In Taipei, no fewer than 20,000 families were left without tap water due to the increased turbidity in rivers of northern Taiwan.

“4,500 residents of 39 townships in eastern, northern and central Taiwan were evacuated,’’ authorities said.

The Central Weather Bureau warned of flooding in coastal and low-lying areas.

Authorities said that the typhoon would head toward mainland China on Tuesday.