Entries for AMVCAs to close on the 30th of October | Hurry Now & Send in your Submission! 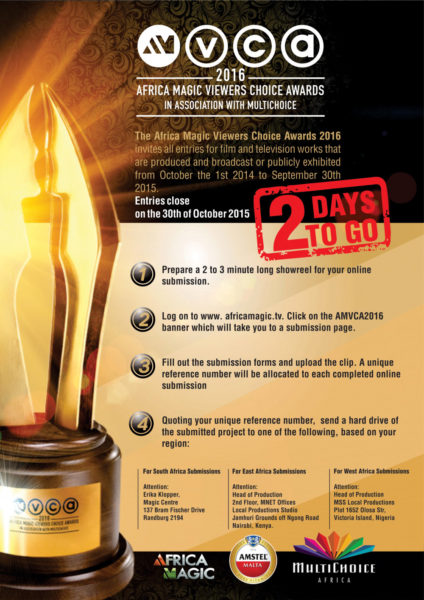 Entries for the fourth edition of the prestigious Africa Magic Viewers’ Choice Awards (AMVCAs) close on the 30th of October, 2015, the organisers, Africa Magic, have announced.

Filmmakers from across the continent still have a chance to send in their entries and participate at the 2016 AMVCAs, but only if they send in their entries before the 30th of October. Wangi Mba-Uzoukwu, Regional Director for M-Net (West), said: “Submissions for the fourth edition of the AMVCAs are still ongoing and we urge all filmmakers across the continent who meet the criteria to send in their works. All film and television works that are produced and broadcast or publicly exhibited from October 1st 2014 to September 30th 2015 qualify to enter for the 2016 AMVCAs“.

The AMVCAs were created to celebrate the contribution of African filmmakers, actors and technicians in the success of the continent’s film and television industry and with the success of the previous three editions, preparations for the 2016 edition are underway. For the 2016 edition, a new head judge and three new voting categories were recently announced. The head judge, Njoki Muhoho, is a respected Kenyan filmmaker and she takes over from Femi Odugbemi who held the position for three years. The three new voting categories are Best East African movie, Best West African movie and Best Southern African movie, all of which exist side by side with the overall best movie category.

For the 4th edition of the AMVCAs, the organisers are inviting all entries for film and television works produced and broadcast or publicly exhibited from October the 1st 2014 to September 30th 2015.