Rihanna is stunning for her spread in Vanity Fair magazine.

The 27-year-old Bajan music star gets really personal and candid in the interview. Her photos were shot by Annie Leibovitz. 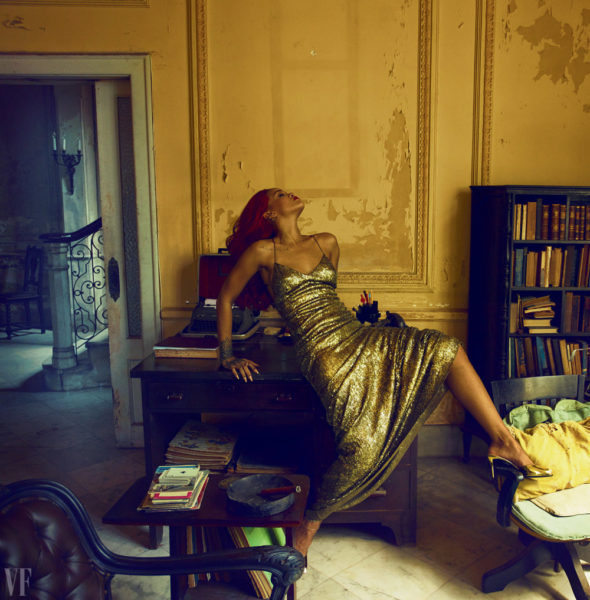 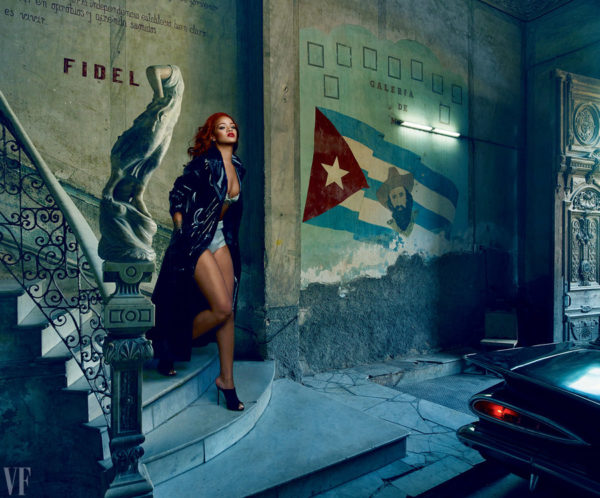 On not being as wild as the media portrays: I honestly think how much fun it would be to live my reputation. People have this image of how wild and crazy I am, and I’m not everything they think of me. The reality is that the fame, the rumors—this picture means this, another picture means that—it really freaks me out. It made me back away from even wanting to attempt to date. It’s become second nature for me to just close that door and just be O.K. with that. I’m always concerned about whether people have good or bad intentions.

On dating Chris Brown: I was that girl who felt that as much pain as this relationship is, maybe some people are built stronger than others. Maybe I’m one of those people built to handle shit like this. Maybe I’m the person who’s almost the guardian angel to this person, to be there when they’re not strong enough, when they’re not understanding the world, when they just need someone to encourage them in a positive way and say the right thing.

On thinking she could change him: A hundred percent. I was very protective of him. I felt that people didn’t understand him. Even after … But you know, you realize after a while that in that situation you’re the enemy. You want the best for them, but if you remind them of their failures, or if you remind them of bad moments in their life, or even if you say I’m willing to put up with something, they think less of you—because they know you don’t deserve what they’re going to give. And if you put up with it, maybe you are agreeing that you [deserve] this, and that’s when I finally had to say, ‘Uh-oh, I was stupid thinking I was built for this.’ Sometimes you just have to walk away. I don’t hate him. I will care about him until the day I die. We’re not friends, but it’s not like we’re enemies. We don’t have much of a relationship now.

On having sex for fun: If I wanted to I would completely do that. I am going to do what makes me feel happy, what I feel like doing. But that would be empty for me; that to me is a hollow move. I would wake up the next day feeling like shit.

On dating rumours:  This industry creates stories and environments that can make you uncomfortable even being friends with someone. If you see me sitting next to someone, or standing next to someone, what, I’m not allowed to do that? I’m like, are you serious? Do you think it’s going to stop me from having a friend?” But, she adds, “I’m the worst. I see a rumor and I’m not calling [them] back. I’ve had to be so conscious about people—what they say and why people want to be with me, why people want to sleep with me…. It makes me very guarded and protective. I learned the hard way.

On her kind of man: I always see the best in people. I hope for the best, and I always look for that little bit of good, that potential, and I wait for it to blossom. You want them to feel good being a man, but now men are afraid to be men. They think being a real man is actually being a pussy, that if you take a chair out for a lady, or you’re nice or even affectionate to your girl in front of your boys, you’re less of a man. It’s so sick. They won’t be a gentleman because that makes them appear soft. That’s what we’re dealing with now, a hundred percent, and girls are settling for that, but I won’t. I will wait forever if I have to … but that’s O.K. You have to be screwed over enough times to know, but now I’m hoping for more than these guys can actually give.

Read the full feature below.