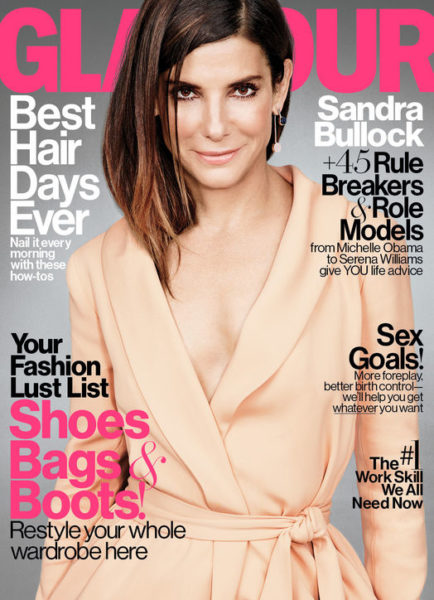 Hollywood actress Sandra Bullock is the cover star for the November 2015 issue of Glamour magazine.

In the magazine, the 51-year-old actress talks about fame, George Clooney, and the one thing that forced her to get her things together. 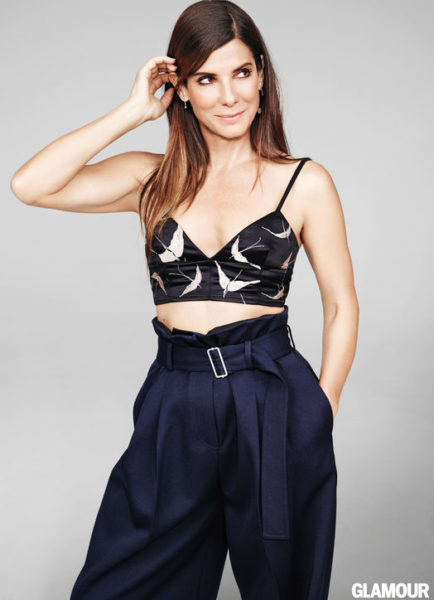 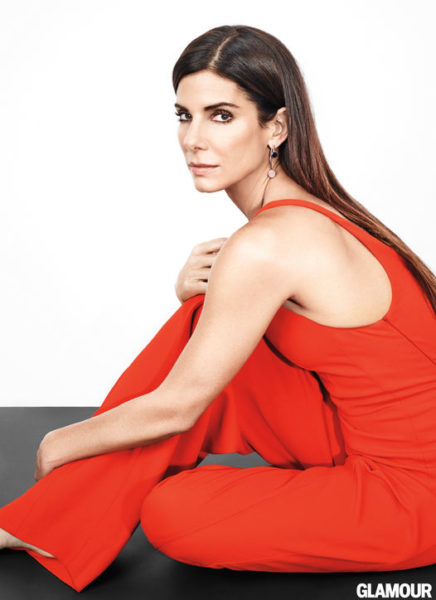 On asking to play the male role in Our Brand Is Crisis: “I did as my mother did: I put my blinders on and blazed forward. Sometimes you get a no. But I expect the no. I don’t expect the yes. With this I got very nervous. I didn’t know if George had made this for himself. But the response was ‘We’re cool with it.’ And then the role—I mean, it was so beautifully written for a man. It wasn’t one of those things where you go, ‘Hmm, how do we change it to a woman?’ You just change the sex; that was pretty much it. She’s human. She deals with addiction; she deals with mental illness. She’s brilliant at what she does, and she gets lost in the fact that all she cares about is a win. You look at our world—and back to my son: How do you raise a child to not make it all about the win when all we see in our world is people saying, ‘In order to have success, you have to win’?”

On how she met George Clooney: Grant, George, and the person I dated were all friends. I met George at a party where he was doing Buddy Hackett imitations! George was the reason the guy that I ended up dating dated me. He was like, “If you don’t get with her, I’m gonna get with her.” He was kidding, but sort of pushing. So we’ve all known each other for umpteen-chillion years and have supported each other from afar.

On her privacy: “I’ve always been insanely private. When I [first] stepped into this, it was still loud. The tabloids were violating. I went, ‘How can people write that?’ I spent a year and a half, two years, distraught, saying, ‘You can’t say these lies.’ I spent years fighting battles you can’t win. As loud as it’s gotten now, it’s the same panic. As much as I profess to being able to shut it out, there are times I can’t, like when it’s hurtful to people I care about. Me, I get it. But when it hurts other people? Like, you come after my son, I’m gonna go postal. But they do.”

On her son facing prejudices for being African-American: Every day. Tearing up again. You see how far we’ve come in civil rights—and where we’ve gotten back to now. I want my son to be safe. I want my son to be judged for the man he is. We are at a point now where if we don’t do something, we will have destroyed what so many amazing people have done. You look at women’s rights; it’s turning into a mad, mad world out there. But sometimes it needs to get really loud for people to say, “I can’t unsee this.” If I could ride in a bubble with him for the rest of his life, I would. But I can’t.

On if she still has her high school cheerleader outfit: “Embarrassingly, yes. That might come in handy some sexy night. I don’t know who I’m saving it for. I want to be buried in it.”

For more from Sandra, visit Glamour.com.

Uche Jombo’s Son is Super Cute! Lands his First Magazine Cover with her for WOW! Mag