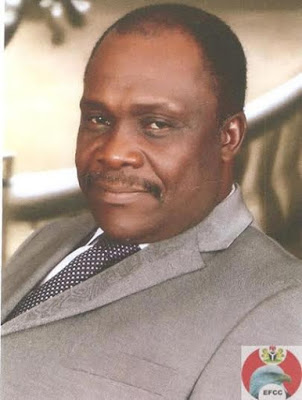 A few days ago, it was reported that a man named Jerry Ogbonna Obike Phillip, withdrew the sum of N45 million said to have been transferred to his account in error.

And now, he is speaking out, stating that the allegations are false.

Jerry took to his Facebook page to set the record straight:

My attention has been drawn to the falsehood being circulatedon some social and print media platforms with my above photograph claiming that I am wanted by the Economic and Financial Crimes Commission (EFCC) for withdrawing N45 million purported to have been wrongly credited to my account by the Central Bank of Nigeria (CBN).

For the avoidance of doubt,let me state categorically that the deposit was not made in error. The said amount was credited to my account with Diamond Bank Plc in 2012 for a contract I have with the Ministry of Petroleum Resources for the lease of three (3) helicopters from Tunisia for the Department of Petroleum Resources (DPR). The helicopters were former President Umaru Musa Yar’Aduas idea to prevent the DPR from hiring helicopters from the International Oil Companies (IOCs)they were supposed to police.

The N45 million was part payment of the mobilisation for the contract. The full mobilization is N110 million, and a total of N90 million has been paid by the ministry as mobilisation. However,some staff ofthe CBN and the Ministry of Petroleum Resources wanted me to launder the money and share it with them without supplying the helicopters for the stipulated service but I refused, insisting that it was against my principles. Our nation will continue to crawl behind other nations of the world if we all continue to acquiesce to such corrupt propositions and compromise the integrity of such or any contracts.

I am ready to fight whoever is behind these false publications because I have God behind me and no one can defeat me in such a just cause no matter how highly placed.

The money was used to take the officers of the DPR and the Ministry of Petroleum Resources on an inspection visit to Tunisia. Officials of the Civil Aviation authorities also travelled for the inspection of the helicopters with officers of Aero Contractors who were to operate the helicopters.

Also, officials and crew of the Tunisian company, Tunisiavia, visited Nigeria to inspect the facilities here in Nigeria where the helicopters will operate.

The N45 million was used to finance all these inspections and the expenses were foreign exchange dominated. At the end of the successful inspection, I was paid N45 million and a letter to the effect that we successfully completed the first phase of the contract was sent to Fidelity Bank Plc.

In another development, I reported some staff of DPR for asking me for bribe with evidence and EFCC and ICPC took no action. At the end of these inspections, the Ministry of Petroleum Resources was supposed to pay N370 million for the helicopters to be ferried to Nigeria in accordance with the terms of the contract. At this stage they refused to make the payment, hence the current stalemate.

Since this matter is in the Federal High court and International court of arbitration for adjudication, I prefer not to give further details at present beyond what is necessary in response to the current effort to slander me with such false publications.

I am not on the run from the EFCC because they know my office in Abuja and my residence. I have no need to run from anybody but no one can intimidate me. The rule of law must be followed at all times. The truth must prevail over lies. I sacrificed my life for 30 years in the military for this nation and cannot at this stage change my habits at 61.

Oma: Beware, Scammers Are on the Prowl… Trying to Use a BVN-Related Email