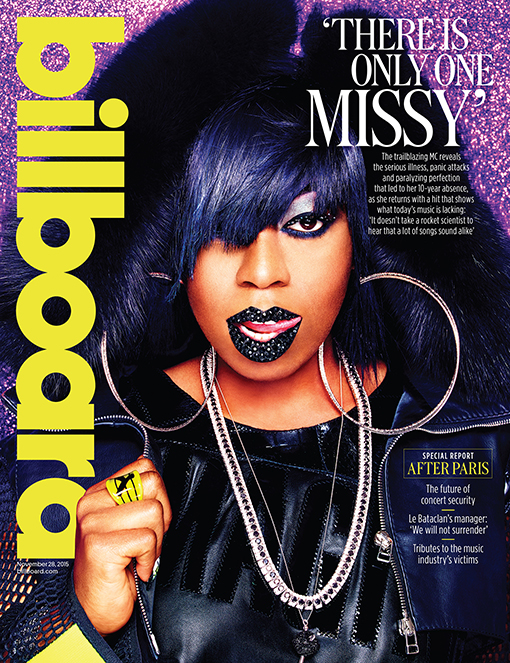 Missy Elliot announced her comeback with a banging new single “WTF” featuring Pharrell Williams a couple of days ago (click here if you missed it) and she basically announced to the world that there is only one Missy.

Billboard magazine agrees and she is their cover star for their latest issue.

Apart from being on the cover of their latest issue, Missy Elliott will also receive the inaugural Innovator award at the 2015 Billboard Women in Music ceremony. The Innovator honor recognizes an artists whose masterful body of work has consistently broken new ground in pop music.

On making a comeback: I have to be very careful. It’s different now. People are quick to be like, ‘You’re irrelevant, you’re a flop, you’re washed up.’

On her break from music: If I wanted to do The Missing Files of Missy Elliott, I have probably six albums just sitting there. But it was much needed. People hadn’t realized that I haven’t just been an artist, I’ve been a writer and a producer for other artists. When you’re writing that much, your brain is like a computer. You have refresh it.

On having Graves’ Disease: It causes hair loss, your eyes bulge,. My blood pressure was always up from just overworking. It started to change [my] way of life. There were physical changes, extreme headaches, extreme weight loss. What that does to a person, being a public figure and knowing people are looking, judging? That’s a tough thing.