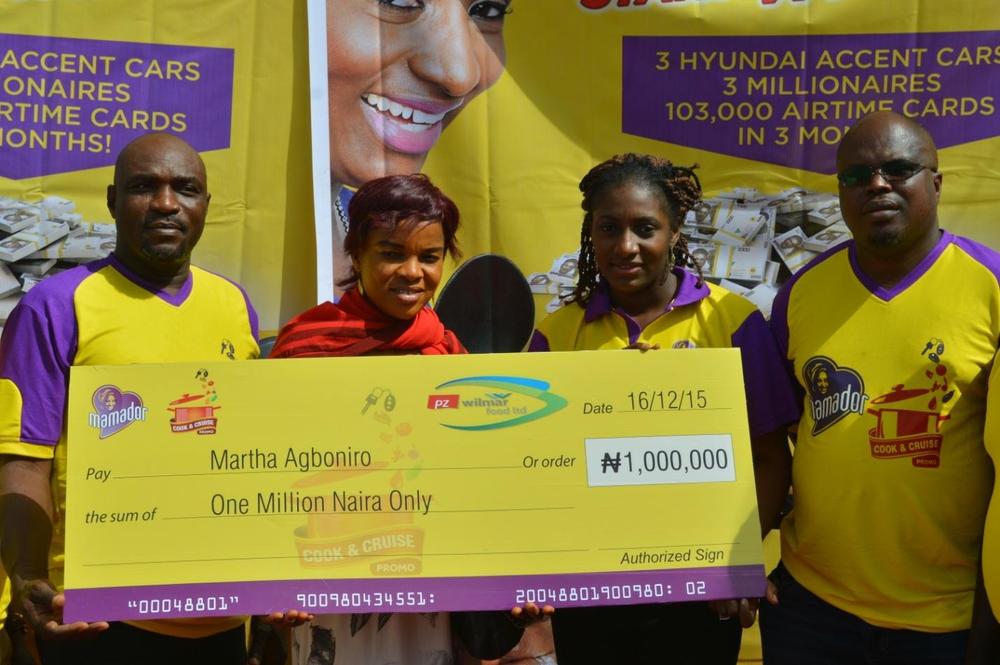 Another N1 Million cash prize winner has emerged in the ongoing Mamador Cook and Cruise Promo. Martha Omorowa Agboniro, a chef in Benin City, Edo State was baking meat pies when she was called on the number with which she entered the promotion by the Mamador Brand Ambassador, Funlola Aofiyebi-Raimi. 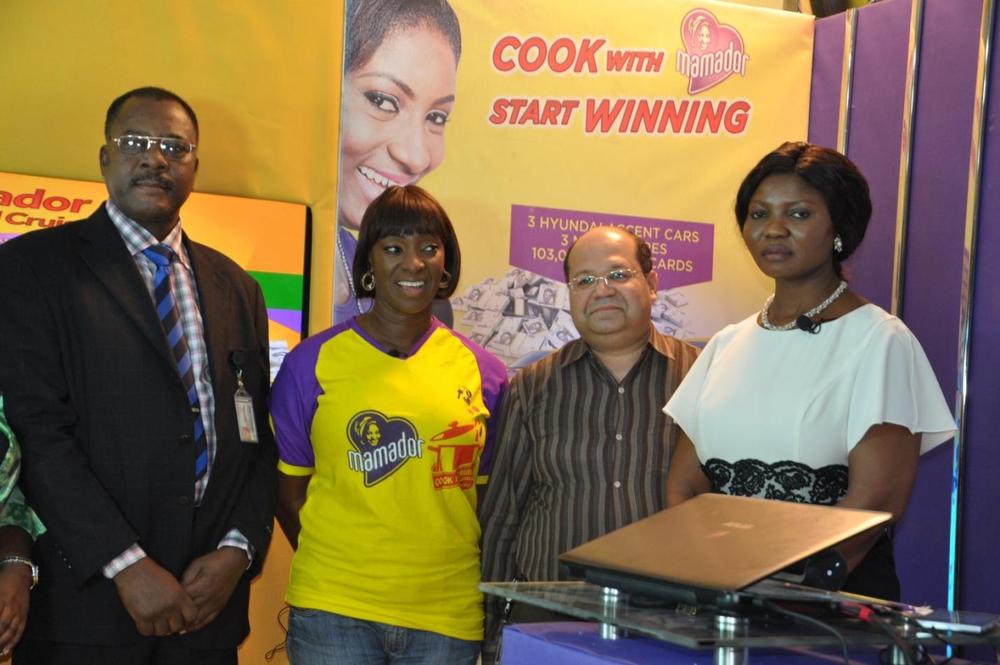 Mrs Agboniro answered the call immediately, thinking one of her customers was calling to place an order for the weekend. She cautiously said “yes” when she was asked if she sent in an entry for the Mamador Cook and Cruise Promo. She was intrigued but couldn’t fathom the connection between the entry she sent for the promo and the telephone call. The Benin City Chef, proprietress of Fluffy Catering Services went dead silent for about 8 seconds when Funlola Aofiyebi later informed her she had won N1 million before screaming in wild joy. Her cheque was recently presented to her in Benin City by the Brand Manager, Mamador Cooking Oil, Toyin Popoola-Dania. 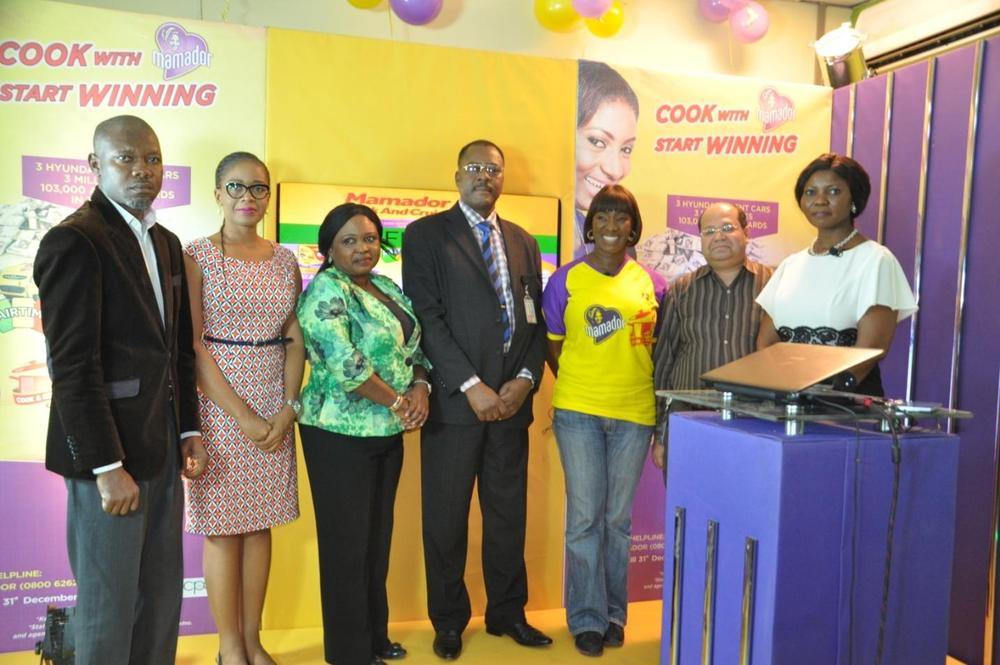 General Manager, Marketing, PZ Wilmar, Bukola Bandele explained that in the short time Mamador Cooking Oil made its debut in the market, the premium brand has been well accepted by consumers and it is time to reward them in appreciation of making Mamador their brand of choice. Mrs Bandele further pointed out that the successes the brand has recorded is due to its consistent high quality and growing awareness of Nigerian women on the need to feed their families with heart-friendly cooking oil. 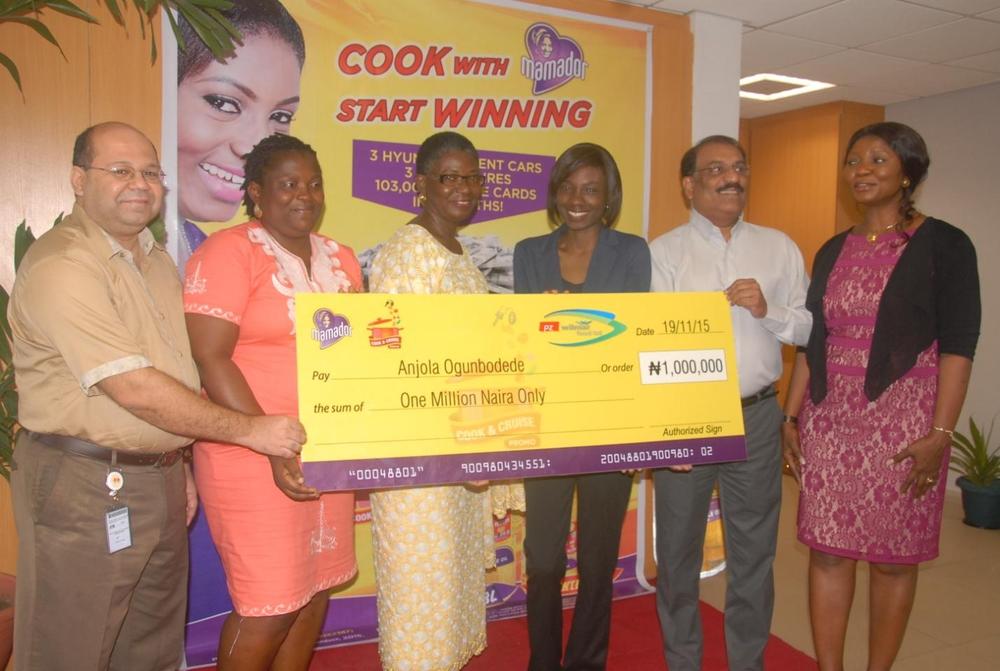 Anjola Ogunbodede, a staff of a bank in Lagos was the first N1 million cash prize winner in the Mamador Cook and Cruise Promo. She called at the Ilupeju offices of PZ Wilmar on Thursday 19 November 2015 to collect her cheque. Other cash prize to be won in the promo ranges from N5,000 to N30,000.

The premium Mamador Cooking Oil brand is rewarding its loyal consumers with whopping prizes totaling over N20,000,000 (over Twenty Million Naira) in its inaugural consumer promo which is to run till the end of December 2015, three lucky customers will drive away 3 brand new Hyundai Accent cars each, another 3 winning N1,000,000 (One million Naira) cash prize each and several other consumers winning over N8,000,000 (Eight million Naira) in cash and airtime.

To win in the promo, the consumer will have to buy a 2.8L or 3.8L within the three months period of the promo, scratch the concealed silver panel on the label and send the revealed PIN preceded by the word “MAMADOR” to a short code “20822”; an auto response inform the consumer of the number of stars earned and if he/she won instant airtime. Any valid PIN Entry qualifies the consumers for the monthly draw and acquiring minimum of thirteen (13) stars qualifies consumers for the grand finale draws. Raffle draw will be conducted after every 30-day cycle of the promo for three months with the third being the last monthly raffle draw and the grand finale where the car prizes will be given away.

Related Topics:MamadorMamador Cook and Cruise Promo
Up Next

House of Tara International is the Official Makeup Partner for Music Meets Runway!