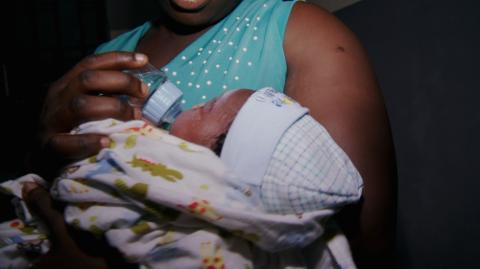 Children and family are intrinsic parts of the Nigerian culture, and as such a lot of people go to extreme lengths to ensure that they get children.

So how far will a Nigerian go to get a baby? Well, international news organization Al Jazeera has aired an episode on its “Africa Investigates” programme – focusing on what it tags “Nigeria’s Baby Farmers”.

The Al Jazeera journalists who went undercover for this report posed as a couple who have been trying to have children for 12 years. Armed with hidden cameras, they visited orphanages trying “to find out how easy it is to buy a child illegally, with no questions asked. They are offered a baby at Destiny’s Child orphanage in Ulakwo by Ada Ezeoyi, for $4 000 for a girl or $5000 for a male child.
They are also offered a baby by Basic Clinic and Maternity Home in Imo State, owned by Doctor Ohaeri. They are asked for a similar figure.“

Please read an excerpt of the report below:

In this deeply disturbing episode of Africa Investigates, Ghana’s undercover journalist Anas Aremeyaw Anas and investigative reporter Rosemary Nwaebuni team up to identify and expose some of those those behind Nigeria’s heart-breaking baby trade.It is a scam that exploits couples desperate for a baby and young pregnant single mothers – often stigmatised in a country where abortion is illegal except in the most dire medical emergency.

Filming undercover, the team find bogus doctors and clinics offering spurious fertility treatments in return for large amounts of money. In their guise as a childless couple, Anas and Rosemary are falsely diagnosed by one dodgy clinician as being unable to conceive children.

When the footage is reviewed by an official from Nigeria’s Ministry of Health, he is appalled at the way vulnerable people are being conned. “You should not allow these people access to the public,” he says.

But worse is to come. The team go on to uncover orphanages and clinics that act as brokers for illegal baby sales, by which naive, greedy or simply desperate young mothers are “persuaded” to hand over their newborn children for cash.

Seun Akinlosotu: Would You Return Extravagant Gifts From a Suitor?

‘Seun Tegbe: About To Tie the Knot? Here Are a Few Things to Note Before You Say “I Do”