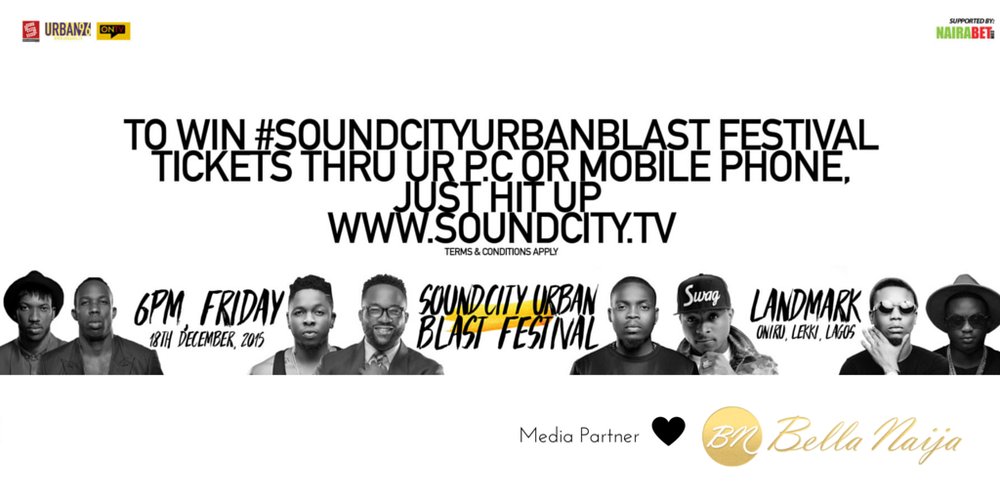 In 2014, The event had the biggest line up of Nigerian acts from Wizkid, BurnaBoy, Wande Coal to R2Bees performing to the largest crowd of Nigerian music fans at the Landmark Event centre in Lagos with every second of the event televised across the African continent to millions of fans on the Soundcity TV Channel. Watch 2014 highlights here.

Year in year out, The #SoundcityBlast platform has served as a medium for artistes to give back to fans. A free-concert where fans are only required to sign up on the Soundcity.TV website, this has positioned the Soundcity Urban Blast Festival has the one shop concert for African artistes to connect and give back to their millions of fans via the Live Broadcast on SoundcityTV.

Soundcity Urban Blast Festival is BIG, scratch that – the biggest, for the HIP, LIVE and an experience made to be a BLAST.

The 2015 edition will be taking place on the 18th of December 2015 at Landmark Event Centre, Oniru Lekki Lagos. It will be a heavy line up with Iyanya, Kiss Daniel, Davido, Victoria Kimani, Olamide, Runtown, Sound Sultan, Lil Kesh, Ycee, Sean Tizzle, Phyno, Reminisce leading a whole bunch of others to the Biggest Live Television concert. Door opens at 6PM and hundreds of tickets up for grab on www.soundcity.tv