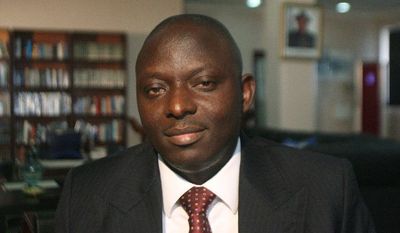 Patrick Akpobolokemi, a former Director-General, Nigerian Maritime Administration and Safety Agency (NIMASA), was on Monday arraigned before a Lagos High Court, on charges bordering on fraud and forgery.

Akpobolokemi was arraigned along with Captain Ezekiel Agaba, Ekene Nwakuche, Governor Amechee Juan, Vincent Udoye, Captain Adegboyega Olopoenia and a company, Gama Marine Nig. Ltd. They were charged by the Economic and Financial Crimes Commission (EFCC) with offences bordering on stealing and forgery to the tune of N754.8 million. They, however, pleaded not guilty to the charges.

In the charge, the accused persons were alleged to have between Oct. 30, 2014 and May 6, 2015, converted more than N300 million belonging to NIMASA to their personal use. The funds were allegedly released to them for the implementation of Voluntary International Maritime Organisation Member State Audit Scheme (VIMSAS). They were also alleged to have converted, to their use, the sum of over N257 million also money released for the VIMSAS scheme. The defendants were also alleged to have knowingly forged a document titled “Re: Request For Payment as consultant for VIMSAS Administration Services,” dated May 25, 2015 purported to have been issued by Aroward Consulting Ltd. The offences were said to have contravened the provisions of Sections 285 and 409 of the Criminal Code Laws of Lagos State, 2011

Childhood Obesity has DOUBLED in Africa – WHO