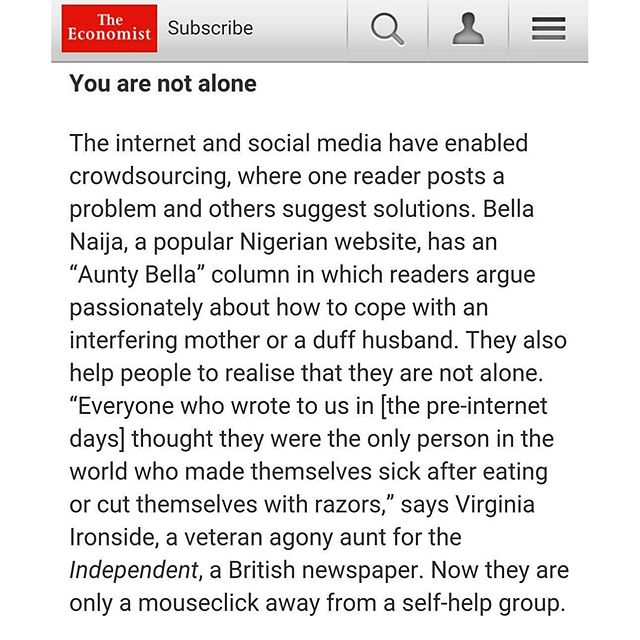 BellaNaija‘s Aunty Bella was mentioned in The Economist recently. We mentioned this on social media and thought to share on here as well.
The article was titled

“Agony aunts through the ages
Whatever should I do?
To understand how societies evolve,read the problem pages“

It featured in the Christmas Special edition of The Economist.

You can read the article HERE

In honour of this special occasion, we reached out to an old school Aunty Bella “Miss”. 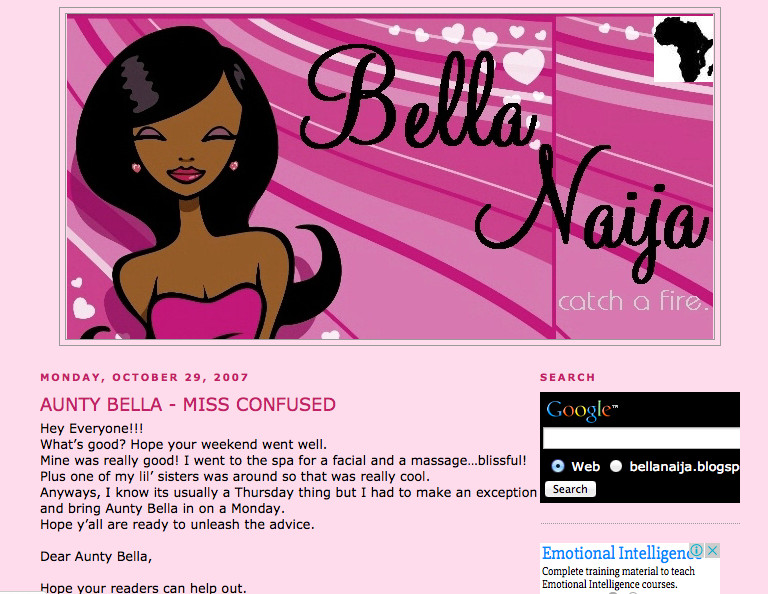 When
I submitted my story to BellaNaija when it was a blog way back in 2007.

Why
I sent in my story because I really didn’t want to discuss the matter with my friends or family and I just wanted to be anonymous and get independent advice.

What was wrong
I was confused about making a career decision vs. maintaining a relationship. I had amazing career opportunities in City A and a boyfriend waiting for me in a very distant City B. I knew if I moved to City B, he would propose and our lives would be based there.
You can read the full story here on the old blog or here on BN.

Did Anyone Guess it was You?
From what I can recollect – no.

Did You Get Good Advice?
ABSOLUTELY!
One really stuck out.

I truly hope you haven’t fallen for the hype that good men don’t exist, so the first one that it kinda works with, is do or die! Good men exist, so don’t be moving up and down in the name of a so called drama free man.

If the man wants a clear future WITH YOU he’ll find a way to make it work. I don’t know if its wise to uproot yourself and your life to go to somewhere you absolutely HATE for someone you haven’t even mentioned that you love. Abi is your existence in life solely for his benefit? The dude hasn’t even talked about marriage, but he wants you to give up so much to be doing girlfriend/boyfriend, E ga sikwa… you berra just stay where you are, and only consider moving if the stakes are increased.

This really struck me because I was quite young and sincerely I had heard all these stories about one “spinster” or the other who had dismissed so many “good guys” and was single forever. Seems so silly but you know how the young mind works. Her comment made me realize that even though he was an amazing guy, I had to make the right decision for myself at that point.

So, what happened
I wouldn’t advocate that everyone makes the same decision I did but it was the best for me.
Yes, we broke up. It was painful at the time but it was totally the right decision. The job went well and I was really happy.
Today, my career is still on track and personally, I am happily married. Though we do not keep in touch, he is also doing well and is married as well.

Wishing for happy next steps for all our Aunty Bella – Miss, Mr and Mrs.