After comedian Lepacious Bose criticized some celebrities for sharing pictures of veteran musician Nomoreloss who passed away on March 21, 2016, one of such celebrities Azadus has come out to speak against Bose’s message.

Azadus, via Instagram, stated that the fact that he and other celebs did not keep in touch with Nomoreloss doesn’t mean they do not wish him well or they weren’t friends. Instead people who knew about his deteriorating health and didn’t speak up are the ones to be blamed. 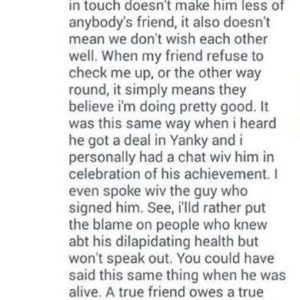 Meanwhile, the Service of Songs for Nomoreloss will hold on Thursday March 31, 2016 while the burial ceremony will take place on April 1, 2016, in Lagos