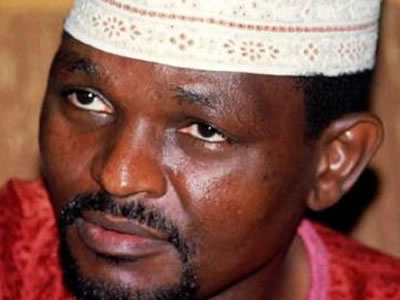 Major Hamza Al-Mustapha who was the Chief Security Officer (CSO) to late General Sani Abacha, has said that Abacha did not loot the nation’s treasury but only lodged the said amounts outside the country so that Nigeria will have funds if the international community imposed sanctions on the country.

According to Hamza, there were “force” from the international community and within Nigeria that were enemies of the late Head of State who were ben on removing him from office.

According to TODAY.ng, Hamza said this while speaking with the media in Lagos on Monday.

General Sani Abacha served this country for four years and seven months and during that period, he stepped on many toes. Aside the two or three coup plots that were made known to the public, there were several others that were not made known.

There was a meeting in Abuja where it was agreed that money should be kept outside the shores of the country so that when sanction came, that money will keep Nigeria afloat. Tom Ikimi was the foreign affairs secretary then.

At that time oil was selling for seven or eight dollars. We took no loan to run the economy and that was when we also created the Petroleum Trust Fund (PTF). I was embarrassed while in prison and I heard about what people called ‘Abacha Loot’. I wrote from prison to the late Abacha family to publish and make public whether those monies were in his name, date of lodgements before he became head of state or after he became head of state.

I was at the meeting where the decision was taken but because all of us could not leave the Villa, I had to go back before the meeting ended. Like I said, Abacha stepped on toes and those people have still not forgiven him even in death.

You should also remember that Abacha was not traveling out of the country. At the beginning of his administration he did go to Pakistan, Saudi Arabia and perhaps one or two other countries and that was in 1994. Most of his travels were within Africa, so how was he able to stash such money outside the shores of the country?

While as his CSO, the only bank account I had was with the Bank of the North and that was where my salary was paid. I went to the Army to serve my country and not to make money as I came from a well-to-do family.

Hamza also pleaded for more time to conclude his court cases before revealing what led to Abacha’s death. According to him, “what killed Abacha was also what killed M.K.O Abiola“.

“Like I said before Oputa Panel, what killed Abacha was also what killed M.K.O Abiola. I will just plead with you to have patience; once I’m through with the court cases, they will be made public in my memoirs and they are in three volumes,” Hamza said.

The former CSO also called President Buhari an honest Nigerian who has been dragged into politics.

“General Buhari is an honest Nigeria who has been dragged into politics. No one can question his love for the country. Even his enemies acknowledge that. And those are the qualities we saw in him; that was responsible for his appointment to head of the Petroleum Trust Fund (PTF),” he said.