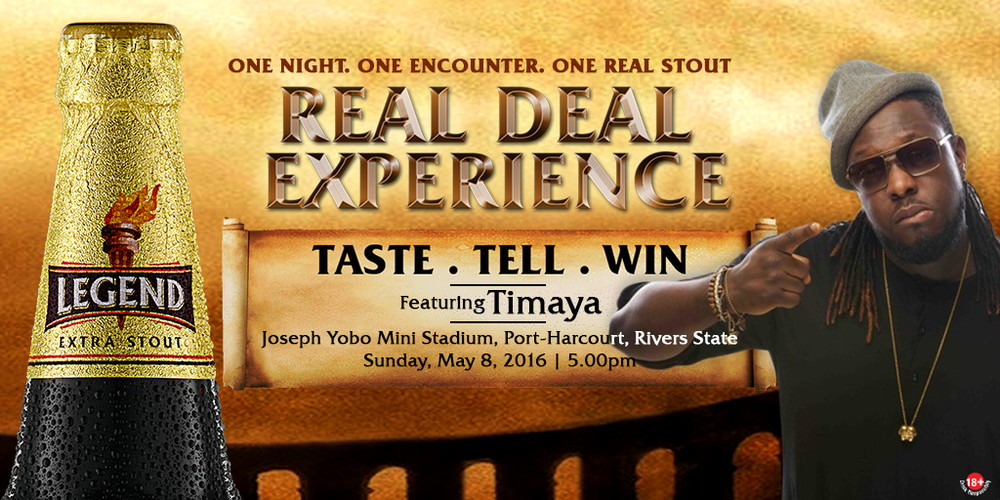 Timaya, who was raised in Port Harcourt is particularly excited about bringing the Legend experience to the people, as memoirs of growing up in the neighbourhood will remain ever pleasant. The self styled “Egberi Papa 1” will join stars like Kcee and Oritsefemi as a headliner on the Legend Real Deal Experience tour.

The Legend Real Deal Experience, which has already toured in Lagos, Onitsha, and now berthing in Port Harcourt, will feature a full-sized rotating bar, incredible onstage stunts, musical performances, as well as exciting game shows with lots of prizes to be won.

Speaking on his impending performance in Port Harcourt, Timaya enthused:

I’m so excited to be bringing my music and act to the town most instrumental in shaping my early days! I promise to give my people everything they want and more. If I don’t do this for them, who else would I do it for?

The Legend Real Deal Experience has been hosted in two cities, Lagos and Onitsha and we are happy with the mileage it has gained. We’re hoping that Port Harcourt will not disappoint. We are counting on Legend fans to come out in their numbers, not only for Timaya but also for other performances set to thrill everyone. We have a lot of prizes to be won on the 8th of May.

The Real Deal Experience will visit other major cities in Nigeria in the coming weeks.