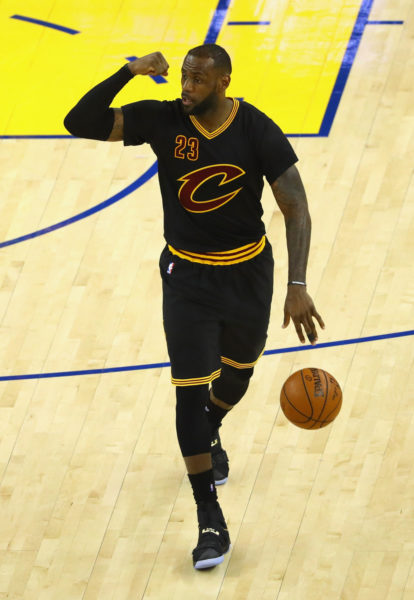 If you are not aware of the incredible comeback fight of LeBron James’ Cavaliers to win the NBA championship on Father’s day, either you are living in the moon or you just do not have flair for basketball.

The Cavaliers defeated the Golden State Warriors, 93-89, to win their first NBA championship on Sunday 19/06/2016 at Oracle Arena. It was one of the toughest NBA finals as the Cavaliers became the first team to come back from a 3-1 deficit to win the NBA Finals.

LeBron James had 27 points, 11 rebounds, 11 assists and an emphatic blocked shot in the final minutes that snuffed out Andre Iguodala’s apparent fast-break layup.

As I passionately watched the NBA final between Golden State Warriors and Cavaliers, I couldn’t help but noticed the impact of LeBron James’ confidence level on the team which is worth inculcating and sharing.

Self-confidence Makes one Set Daunting Targets
After four successful seasons in Miami and two titles with the Heat, James came back to the Cavaliers in hopes of winning the title this franchise and championship-starved city so coveted. There had been no championship celebrations in Cleveland since the Browns won the 1964 NFL title. The Cavaliers had not done it in 45 previous years of existence.

According to James, ‘my goal is to win as many titles as possible, no question. But what’s most important for me is bringing one trophy back to Northeast Ohio.’

These were the words of LeBron James in July 2014 as he sealed a move back to Cleveland Cavaliers after he announced his ‘Decision’ to join Miami Heat over committing his future to the team which drafted him in 2003.

Even James knew it was a huge target but his instinct and self-confidence convinced him that he can achieve his set target.

Self-confidence Makes One Take Risks
LeBron James moved back to Cleveland Cavaliers in July 2014 after four successful seasons with Miami Heat where he won two titles and two MVP. There had been no championship celebrations in Cleveland since the Browns won the 1964 NFL title, yet James believed that he can deliver the NBA ring to Northeast Ohio to end unbearable years of major sports championship drought.

According to James, ‘when I left Cleveland, I was on a mission. I was seeking championships, and we won two. But Miami already knew that feeling. Our city hasn’t had that feeling in a long, long, long time. My goal is still to win as many titles as possible, no question. But what’s most important for me is bringing one trophy but to Northeast Ohio’

James had the opportunity to continue his fine spell with the Miami Heat or join another franchise. But he opted to pitch his risky tent with his home town franchise. A decision which has landed him a legendary status in the slam and dunk game.

Self-confidence Makes one Fearless
There were handful of daunting factors and incidence that stared the faces of LeBron James and his team mates prior to their NBA triumph.

Firstly, Cleveland Cavaliers had not won the NBA championship since the Browns won the 1964 NFL title. Secondly, they lost to the Golden State Warriors in six games finals in 2015.

Thirdly, they are facing the defending champion that achieved a 73 regular-season wins to break the 1995-96 Chicago Bulls’ mark, and also boast of two-time reigning MVP Stephen Curry

Lastly, they were 3-1 deficit in the six game finals and managed to win two consecutive games to force the game seven.

“… He was like, ‘I’m going to come back home because I promised them that I would do something.’ And he carried us the whole way.”

James was fearless even in the brink of defeat. This was instrumental to the Cavs’ historic comeback victories that won them the NBA championship trophy.

Self-confidence Pushes One to Achieve the Unimaginable
The Cavs escaped elimination twice to force Game Seven back at Oracle Arena, where the Warriors went up 2-0 with a pair of lopsided wins to start the series.

Cleveland became the first team to win the NBA trophy after 3-1 deficit and just the fourth team to win an NBA Finals Game Seven on the road.

James said after the famous win ‘I’m true to the game, and I know what I bring to the table. I came back for a reason. I came back to bring a championship to our city.

I knew what I was capable of doing. I knew what I learned in the past couple of years that I was gone, and when I came back, I knew I had the right ingredients and the right blueprint to help the franchise get back to a place that we’ve never being. That’s what it was all about.’

This statement aptly shows that James is a man filled with confidence. He believed in his capacity, and knew he was capable of using his experience to achieve unimaginable feat for the Cavs.

Self-confidence Motivates People Around You
Cleveland Cavaliers is a brilliant team but lacked the title winning mentality and self-confidence to win the NBA championship. This is where LeBron James comes in.

According to James ‘I’m going into a situation with a young team and a new coach. I will be the old head. But I get thrill out of bringing a group together and helping them reach place they didn’t know they could go.

Just as he had promised, James indeed served as a mentor, reference point and a motivator. With his presence in the court and inspirational team talks, he was able to inspire the Cavs to an incredible NBA championship win.

Having won two back to back NBA championships with the Miami Heat, James confidence level was full to the brim. Hence it was easy for him to transform the mentality of his team mates and injected a high confidence level on the team.

It always fun to see your set target being achieved. Most often, the onus does not lie in setting the target, but do you believe in yourself? Do you have the required confidence level?

Just as James said after the victory; “I’m coming home with what I said I was going to do.’ You can say the same thing in whatever you have set out to accomplish. All you need is; believe in yourself. Be self-confident!

Wanderlust with Lola: 5 Tips For Enjoying Travel Without Worrying Too Much About Money

Richard Agu is a speaker and freelance writer passionate about entrepreneurship and Health. He co-owns two blogs that specializes on dishing out quality startup ideas and skin care tips. Get in touch with him for ghost writing, website content creation and other professional writing services.