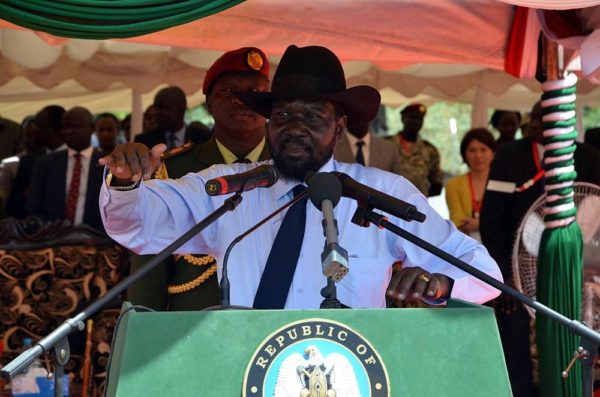 Fierce overnight artillery and gunfire fight has left more than 100 soldiers dead in South Sudanese capital, Juba, on the fifth anniversary of the country’s independence.

South Sudanese local media reported the casualties at 150 deaths, including 36 soldiers from the Sudan People’s Liberation Movement-Opposition (SPLM-IO) loyal to Machar and 80 from President Kiir’s side.

Machar remains the Commander-In-Chief of the forces loyal to him while Kiir maintains the command of the overall national security forces as part of a peace deal ending months of conflict.

Meanwhile, the fight at the Presidential Palace led the U.S. Embassy in South Sudan to issue a travel advisory.

The advisory warned against non-essential travel to the vicinity of the palace and elsewhere in Juba.

“The U.S. Embassy advises U.S. citizens that small arms fire has occurred in the vicinity of the Presidential Palace and elsewhere in Juba. Citizens should avoid the area of the Presidential Palace and exercise caution. Once in a safe location, U.S. citizens should shelter in a place preferably away from doors and windows and avoid non-essential movement,” stated the advisory.

During the Friday fight, gunfire also rocked the UN compound, where thousands of people displaced by the 2013 political crisis have been sheltering.

The UN Mission in South Sudan (UNMISS) said it was outraged at the outbreak of the violence in Juba, which severely affected the civilian population.

The heavy fighting in Juba town and in close proximity to the UNMISS compound located at UN House, Jebel, prompted hundreds of internally displaced people to flee from the UNMISS protection of civilians site.

The UN said several rounds of ammunition hit the buildings in the house.

UN peacekeepers have increased their presence on the perimeter of PoC sites one and three and enhanced their patrol inside and in the vicinity of the sites.

The UNMISS said its staff were providing assistance to those injured during the fighting.

The South Sudanese Ministry of Defence confirmed the fighting stopped on Saturday, the official day for the celebration of the independence anniversary.

However, authorities in South Sudan announced there would be no national ceremony to mark the Independence Day celebrations due to the lack of finances to organize the event.

The country, recovering from crisis which broke out in 2013, took the step to withhold the national celebrations.

But the president planned to issue a televised national address on economic and political governance progress since the signing of a peace agreement with his vice.

Both leaders called for calm when the sound of gunfire and mortar shells rang close to the presidential palace as the three leaders finalized a meeting on the country’s national security status.

Related Topics:South Sudan
Up Next

Boko Haram: 16 Insurgents Killed as Troops Repel Attack on Base

Another one in the Bag! Williams Sisters win 6th Wimbledon Doubles Title