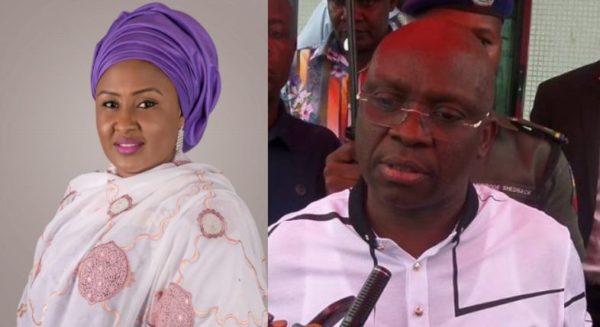 Governor Ayo Fayose of Ekiti state has held on to his claim that first lady, Aisha Buhari‘s name was mentioned in the Halliburton Scandal.

The acting Public Affairs Officer, U.S Consulate General, Lagos, Frank Sellin had said that U.S “had no information to provide on the matter”

Fayose, through his lawyer, Mike Ozekhome said that Aisha’s name appeared “conspicuously” on the 22nd page of the judgment delivered by the court which convicted American Congressman, Williams Jefferson in 2009.

He said this in response to a letter from the President’s wife, through her counsel, Mary Ekpere & Co., dated June 22, 2016, demanding a retraction of the statement. She threatened legal action if the retraction was not made within five days.

“Our client has referred to us your letter dated 22nd June, 2016, on alleged defamation of the character of your client, Her Excellency, Aisha Buhari, the wife of Muhammadu Buhari, GCFR, with firm instructions to reply to and reject same in its entirety.

Our client states and reaffirms categorically that the statement he made as regards the involvement of Aisha Buhari, the wife of President Buhari, in the Halliburton scandal, is correct and justified in law, having regards to a court judgment convicting one  William Jefferson for bribery in the Halliburton case.

Therein, the name of the President’s wife featured conspicuously. At page 22 of the said judgment delivered by the United State District Court, Eastern District of Virginia, Alexandria Division, USA, in criminal case No 1: 07CR209, the said William Jefferson was sentenced at 9.00 am on November 13, 2009, by Mark D. Lytle. Your client, Aisha Buhari, was specifically mentioned in the judgment,” the letter read.