Back in 2013 Yomi Casual admitted to being in a long distance relationship with his childhood girlfriend. According to Yomi, they started the relationship in Warri and she knew him when he was still hustling, making hand-made cards and signboards.

Fast forward to 2016, last night, and an Instagram user took to Yomi Casual’s comment section to reveal that he impregnated his ex, deceived her to go and have the baby in Warri and that she should hide the baby from the public so that people don’t bewitch them.

Yomi you are just one hell of a useless boy living a fake life. Ungrateful soul that’s what u are. Where was dis harlot wen faith was suffering with in your one room apartment? Now u impregnated faith, u deceived her to go and have d baby in warri. That she should hide the baby from the public so that then don’t bewitch them. All for your selfish interest so you can chill with the contaminated public p***y. You have abandoned faith and your one month old son in warri. You think God is asleep. If you don’t retrace your footstep the thunder that will fire you will come with abject poverty and infertility. Beast.

The comment was posted under a photo of Yomi Casual posing on the red carpet with another woman.

What is dope about this fake life Lagos wannabe. That rented a house and claimed he bought the house. A girl that was with you when you had nothing. Now because it is all rosy you feel she’s not your class. She lost the first pregnancy she had for you, you deceived her into getting pregnant again by buying her one cheap Camry. After getting pregnant you told her to go and hide in warri. That after the birth of the baby you will pay her bride price. Now baby has arrived, this is the bride price you have for her. God will punish you. You will not go far in life.

So far there has been no response from Yomi Casual and he has deleted the photo that had the comments. 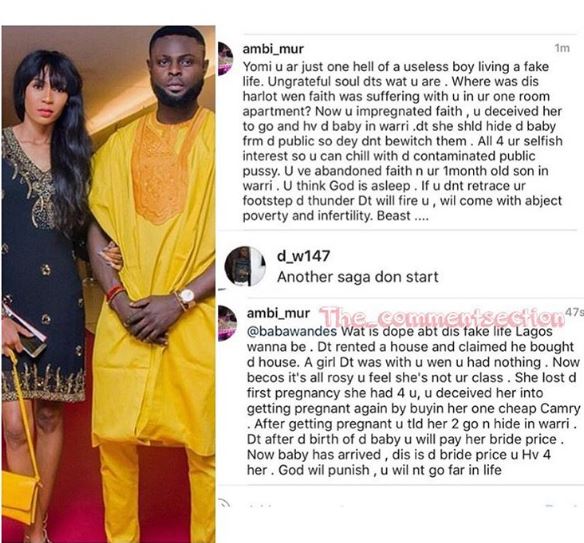