If Nigeria Cannot Stay Together, We Should Go our Separate Ways - Former Minister, Prof Ango Abdullahi 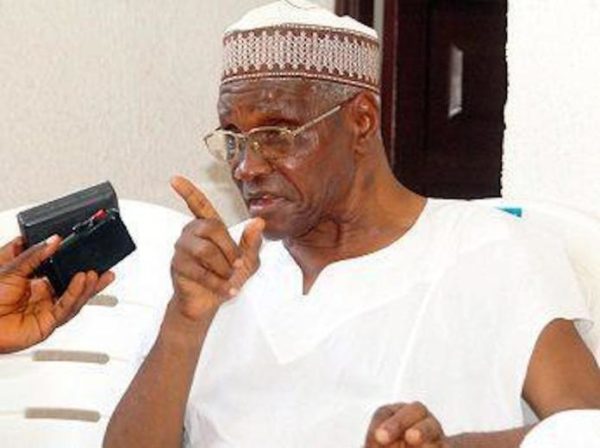 A former Minister of Education and former Presidential Adviser, Professor Ango Abdullahi, has said that Nigeria’s unity is negotiable, adding that the “wish of being one is Utopian”.

According to THISDAY, the former Vice Chancellor of Ahmadu Bello University (ABU), Zaria suggested that if the amalgamation of the country by Lord Frederick Lugard in 1914 was a mistake, it would be best for each region to go their separate ways.

He made this known during the launch of two books by Dr. Hadiza Isa Wada titled, ‘Boko Haram: The Charade vs. Reality’, and ‘The Life and Times of Umaru Turakin Bauchi’.

He argued that no region is afraid of secession, and that if the country cannot stay together, then each region should go their separate ways.

The batures (Hausa for white people) have brought us together. They tried what they could before they left in 1960 to see whether this country could become a political unit that is stable, because without political stability it is impossible to stabilise any aspect of our socio-economic development.

They succeeded up to a point, but they were very lucky because they had our forefathers and founding fathers who were honest.

Let’s understand one another. Understanding one another will be the basis for working together. This wish of being one is Utopian because if you look at examples of other parts of the world there’s a lot to learn from.

Take for example India that got independence in 1948, yet one or two years later Pakistan was created, and in another one or two years, Bangladesh emerged out of Pakistan, because there was insufficient basis on which India would stay together in the first place.

We are responsible for the conditions we’re experiencing today and that we have experienced over the years. This is the basis on which we have made slow or no progress in our development and I think we can accept this as a fact, or continue to pretend and go round and round and round in circles and at the end of the day come back to the same spot.

This is coming from the elite of the country. They’re right to speak their minds, but they should also leave me to speak my mind when the time is right because we cannot continue, because I remember in the last four or five years, particularly when we were headed towards the last elections. We saw all that and then I said it was time.

If Lugard made a mistake in 1914 let’s correct it now. Why not? If Nigerians cannot live together and allow peace and development to reign, then let’s go our separate ways and to our different places so that we can concentrate and develop our children and grandchildren in peace.

There’s nothing wrong with that. So many countries have gone through that before. So I don’t believe in all these emotions and sentiments that Nigeria is indissoluble.

Take Great Britain, they’ve been a model for 1,000 years of democracy and then a year or two ago Scotland that had been in the union for about 350 years opted for a referendum to get out; same problem with Ireland.

The Soviet Union was a super power many years ago, today 12 or 13 countries were created from it.

So what is so special about Nigeria? If we find truly that we cannot develop and guarantee the welfare of our people as a nation and the solution is to go our separate ways, why not?

So you see this is the thing we have to always discuss at all times honestly, especially if we put into context the history of Boko Haram.

On the Boko Haram Terrorist sect, he said the ‘ragtag boys’ who were fed up with the things happening to them became members of Boko Haram.

But then came robberies and Boko Haram was blamed, then came in political interference.

Bombs were also put in churches and mosques and they were not entirely put by Muslims but by both religions. But the real offence was people who knew and should have spoken out did not do so.

Some of us including my teacher and I went to see (Goodluck) Jonathan to discuss it. Some days later, and we heard there was going to be some dialogue, but then two weeks later a state of emergency was declared and Boko Haram was banned.

So the question is who are you dialoguing with if you have banned Boko Haram? These are some of the contradictions we saw, which were clearly political.

We the northerners were taking the brunt of it. And those who ought to have said something stayed quiet. It was Murtala Nyako who came out and said something was going on and before you know it he was on exile,” he added

Abdullahi, who condemned the Niger Delta Avengers (NDA) as ‘economic terrorists’, asked the federal government to deal decisively with the militia group, in order to end vandalism in the oil region.

“In the Niger Delta, for example, people who come out openly and say they are avenging something and that they are fighting to avenge something, they’re worse than Boko Haram. So if you (federal government) are not going to fight the Niger Delta Avengers then stop fighting Boko Haram,” he said.

Related Topics:Professor Ango Abdullahi
Up Next