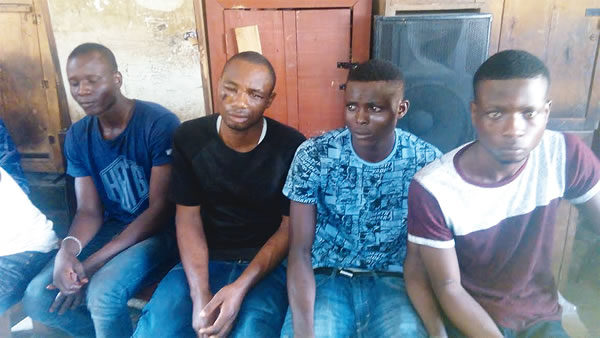 A 4-man gang that specialised in lurking around houses at night and switching off their victims’ generators before attacking them, has been arrested by the Anti-Robbery Squad of the State Criminal Investigation and Intelligence Department (SCIID), Yaba, PUNCH reports.

The suspects were alleged to have been terrorising residents in the Ikorodu area of the state.

The suspects – Akin Ayotunde, 27, Isaac Ogbonna, 23, Sola Dede, 24 and Sodiq Lawal – were arrested last Thursday after invading the apartment of one Bello Hakeem, an environmental scientist, in the Igbe area.

According to Hakeem, he asked two of his to go and fix the problem with his generator after it suddenly went off at about 11:09 on Tuesday.

“About five minutes after they left, they were forced back into the house by four men, who were armed with knives.

They ordered us to cooperate with them. They searched the house and made away with three laptops, six phones, three ATM cards, a new 3.5KVA generator, one 75alms battery, two modems, jewellery, cash, and my Toyota Corolla. They held my family hostage for six hours before leaving at about 6AM the next day,” he said,

He said that the suspects had already withdrawn N100,000 from his account before he deactivated all the stolen ATM cards.

Hakeem said he reported the incident at the Ijede Police Station, adding that two days after the incident, a friend called him that a car that looked like his own had been put up for sale.

He said operatives from the SCIID, Yaba, were alerted and the suspects were rounded up.

According to the gang leader, Ayotunde, 27:

I used to sell ‘garri’ with my grandma in a market before a former Governor of Lagos State, Babatunde Fashola, demolished shops in the market. I tried another job, but it didn’t work.

I then sold the idea of robbing houses to my friends and we agreed to use only knives and not guns. We always lurk around developing areas in Ikorodu at night, look for any house that had its generator on, scale the fence and put off the generator. When the occupants of the house come out to check the generator, we attack. We made N60,000 from our first operation in March.

I was arrested when the man whom I had given the man’s car to called me that he had found a buyer. He said the buyer had paid N700,000 for the vehicle and that I should come for my share. We agreed to meet at a restaurant in Ojota. But on getting there, I discovered that it was a set up and I was arrested.

Another suspect, Ogbonna, an indigene of Ebonyi State, said he was looking for money for treatment of his sick sister.

“My sister needed blood transfusion and I had to look for money by all means. I got N25,000 from the operation,” he said.

The third suspect, Dede, from Ondo State, said he joined the group because he was told nobody would be killed, adding that he needed money to change his apartment.

“An Alfa told me to move out of my family house because there was a spiritual force working against the success of men in the house. I needed money to change my apartment,” he said.

Lawal, who received some of the stolen items was also arrested. He claimed that the suspects lied to him that the goods were imported.

Bring that FUN Element to Your Event this Season for FREE! Find out how you can win Photo Hubb’s Free Booth

If Nigeria Cannot Stay Together, We Should Go our Separate Ways – Former Minister, Prof Ango Abdullahi