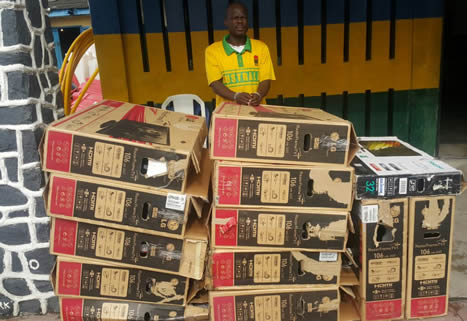 Johnson Adebowale and the Television sets

The Police in Lagos has arrested a 45-year-old man, Johnson Adebowale for allegedly stealing 28 television sets from Atlantic Exhibition Nigeria Limited where he worked.

The suspect reportedly carried out the act after his was sacked by his employers.

PUNCH reports that he loaded the television sets into a truck and transported them to his home in the Ibafo area of Ogun State.

He was arrested after he started selling the equipment at cheap prices in his neighbourhood.

The affected company is into exhibition of products. They were in partnership with a hotel on the Lagos Island where the electronics products were displayed. The electronics were usually kept in a store, which was constructed by the suspect. So, he knew his way round the store.

On August 6, after he had been sacked by the firm, he sneaked into the store and loaded 28 LG Plasma TV sets inside a truck and drove away with them.

By Monday, the company discovered that the television sets were gone and a complaint was lodged at the Victoria Island Police Station.

“We mobilised and swooped in on him. We discovered that he turned his house into an electronic shop and was selling the television sets, claiming that he was a TV manufacturer’s agent. He had already sold six for N50,000 each. The market value for each of the TV sets is between N130,000 and N200,000. We recovered the rest from him,” another source added.

The Lagos Police Public Relations Officer, SP Dolapo Badmos, who confirmed the incident, said that the suspect has been charged to court.

“The exhibits were recovered from him while effort is on to recover the ones already sold,” she added.