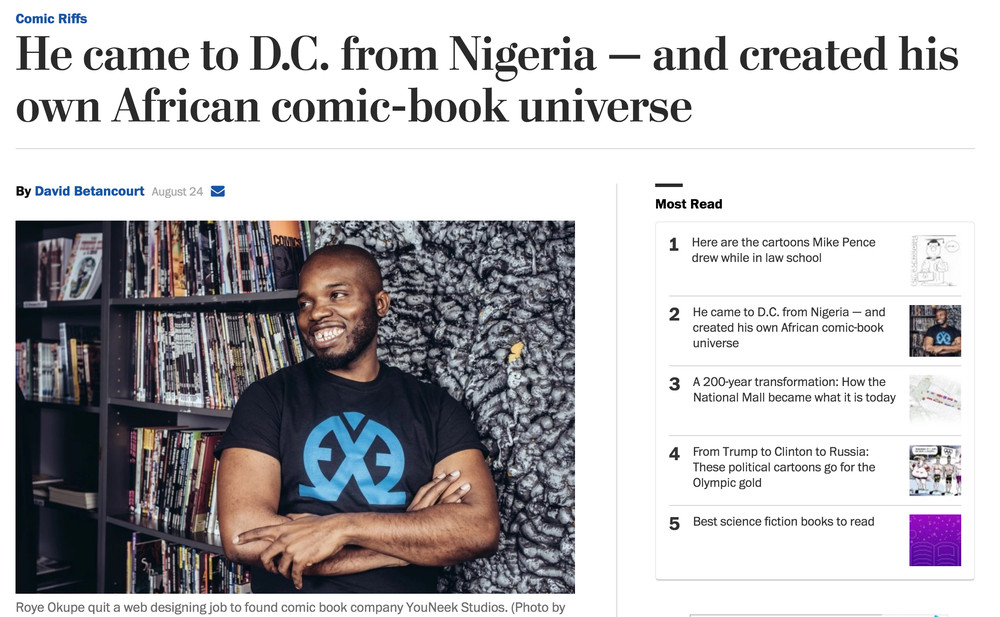 Last year, we shared the story of Nigerian-born animator, Roye Okupe, and his comic book story – E.X.O: The Legend of Wale Williams – a super hero story set in futuristic Nigeria. {Click here if you missed it}

This week, his story was shared on The Washington Post.

Here is an excerpt from the feature:

Okupe, now 31, arrived in the United States in 2002, attending George Washington University and earning a bachelors and master’s degree in computer science in 2007 and 2009. In between those degrees he took a class in animation at the Art Institute of Washington. After college, while working as a web developer for International Software Systems in Greenbelt, Md., Okupe was able to put together an eight-minute animated trailer featuring his first superhero creation, Wale Williams, a young, 20-something Nigerian who suits up in high-tech armor to become the African superhero E.X.O. (Endogenic Xoskeletal Ordnance).

Okupe shopped his trailer to distributors, television networks and investors for a year and got nowhere. One movie producer even told him that E.X.O. looked interesting, but he should think about changing the race of the character.

“That was a down period for me. I really had to dig into believing in myself that I could actually get this done,” Okupe told The Washington Post’s Comic Riffs. “Hearing that from someone who was in the [entertainment] industry, I almost took it for the gospel. But if you have a dream, it’s your responsibility to make it happen and then people will join the bandwagon once you start to get some recognition.”