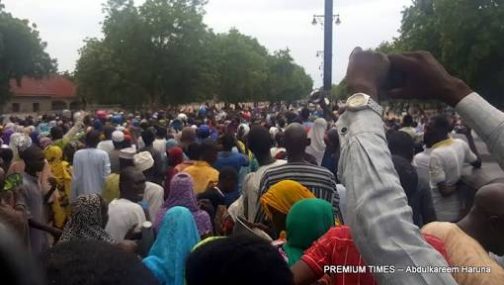 The Borno Government announced on Thursday that it had abolished the Committee for the Feeding of Internally Displaced Persons (IDPs) in the State.

The News Agency of Nigeria (NAN) reports that this followed a protest by some displaced persons over poor feeding.

Hundreds of Internally Displaced Persons (IDPs) on Thursday, barricaded the Kano-Maiduguri highway to protest against hunger and thirst in their various camps.

The Deputy Governor of the state, Mamman Durkwa, told newsmen in Maiduguri that government had approved the immediate abolition of the Committee.

Durkwa, who described the protest as unfortunate, said that the government would not allow greed and self interests to impede efforts to assist the IDPs.

NAN further reports that IDPs from Marte Local Government Area had taken to the streets to protest poor feeding by the authorities.

“The whole thing took us by surprise, I was on my way to the Bakassi IDP camp to distribute food items for household feeding when I got information about the problem.

I immediately proceeded to the place where I learnt that the IDPs were protesting over some issues.

They wanted the feeding Committee abolished and also wanted the quantity and quality of their food to be increased.

We have resolved the problems by announcing the immediate abolition of the feeding Committee,” he said.

He said government had directed the immediate commencement of household feeding in the camp as requested by the IDPs.

“I have directed the State Emergency Management Committee (SEMA) to start giving out food items to the IDPs for the commencement of household feeding in the camp. Already, we have started the household feeding system in camps like Monguno, Kukawa, Gubio, Gwoza, Nganze, Guza-Mala and many others, and it had been quite successful,” Durkwa said.

He said the IDPs’ protest was instigated by some hoodlums to cause breakdown of law and order in the state.

“The IDPs were instigated by some outsiders trying to cause havoc in town with the intent to steal. This is because one of the youths apprehended confirmed that he came from Madugannari to join the IDPs’ camp for the protest. They wanted to cause a riot so they that can loot and maim but we were able to control the situation,” Durkwa said.