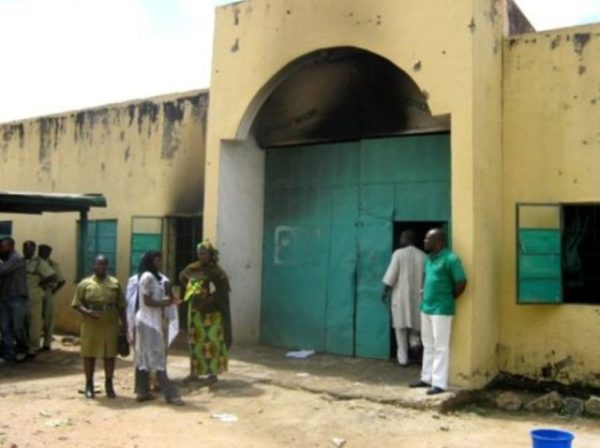 There was commotion at the Kuje Prison in the Federal Capital Territory, FCT, as members of the Nigerian Prison Service Armed Squad reportedly shot indiscriminately.

Vanguard reports that the shooting was a fallout of the last jail break in which some top officials were reprimanded.

The source stated: “There is a lock down in the prison, ‎prisons officials are throwing tear-gas at the inmates to cow them because of the last jail break”.

“We do not know what they want to do with us, some people are on the ground now rolling and crying. There is no jail break, yet they woke up this morning to start shooting tear gas at us,” Vanguard quoted some of the inmates as saying.

Vanguard reports that the Comptroller of Prisons, Federal Capital Territory (FCT) Command, Daniel Odaro, in a statement confirmed that the incident occurred, but “Nobody was shot at”.

“Nobody was shot at. Nobody was hurt. What happened was that there was a threat from one of the cells in the robbery section of the prison where one or two inmates resisting search by prison officers who were conducting search on the inmates.

It was not the whole prison that was involved. It was just a section. Searching is a normal routing in all prisons, worldwide.

We have had to take measures to forestall any form of ugly incident, especially as you would remember that there was a recent incident in the same prison.

I can assure you that there is normalcy in the prison, as we speak. In fact the inmates who were involved have apologized for their unruly behavior. We have also told the inmates that they should relax. Searching is a daily routine.

Inmates who were due for courts had been conveyed to courts before the incident,” he said.