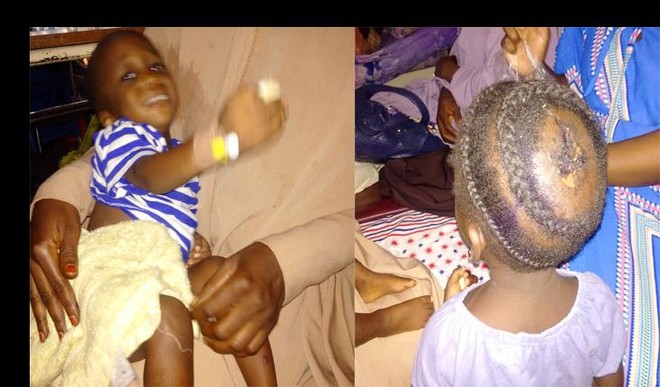 Officers of the Nigeria Security and Civil Defence Corps (NSCDC) are currently after a woman, Hasiya who allegedly brutalized her stepson and stepdaughter in Kaduna, Daily Trust reports.

The victims, Abdulrahman, 2 and Maryam, 4 are presently receiving treatment at a private hospital in Kaduna.

The disturbing incident reportedly took place at the victims’ father’s house located in NDC in Igabi Local Government Area of the state.

Narrating the incident, the biological mother of the children, Halima said she separated from their father when Abdulrahman was just 12 days old.

“Initially, the children were living with me after we separated, but immediately I weaned my son, the father came and took the children away first to his parents’ house and then to his wife. On Monday, I was on my way to the market when I got a call from the father of my children that my son was on admission at the hospital.

I quickly rushed there and when I saw the condition my son was in, I was devastated. He could hardly breathe and he had bruises on his eye, his head, his stomach and his private part. The doctor told me that the fracture on my son’s hand and leg were two weeks old, and I learnt he was not able to walk and was taken to a traditional bonesetter who obviously had not been able to fix the fracture.

My son is being treated for a broken hand, a broken leg and bruises on his eye, stomach, back and private part while my daughter is being treated for a broken head after their step mother used the sole of a pointed shoe to hit her head. They were also starved in the house because if you see the way they gulped down the tea my sister made for them. The people in the hospital can bear me witness,” Halima said.

She added that the NSCDC has given the father of the children two days to produce the suspect.