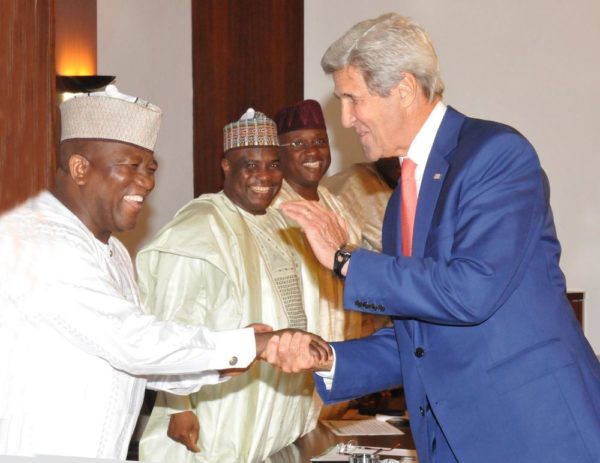 FROM LEFT: GOVERNORS ABDULAZIZ YARI OF ZAMFARA; AMINU TAMBUWAL OF SOKOTO AND MOHAMMED JIBRILLA OF ADAMAWA STATE WELCOMING THE VISITING U. S. SECRETARY OF STATE, JOHN KERRY TO A MEETING WITH NORTHERN STATE GOVERNORS AT THE PRESIDENTIAL VILLA IN ABUJA ON TUESDAY (23/8/16).
5925/23/8/2016/ICE/BJO/NAN

Shettima made this known while briefing State House correspondents on the outcome of the meeting between visiting U.S. Secretary of State, John Kerry and selected governors from the northern states in Abuja on Tuesday.

He said that the U.S. expressed readiness to assist the states in strengthening their agricultural sector, health care system, promote renewable energy and gender empowerment.

“We had very fruitful cross-pollination of ideas with the U.S. Secretary of State, John Kerry and his team.

The issues that we discussed were on the areas of enhancing the wellbeing of our people and in ensuring stability in the Nigerian nation.

We discussed about the issues of the insurgency and other security challenges in Northern Nigeria.

But fundamentally, we made him to realise that underneath the mayhem and nihilism of the Boko haram lie extreme poverty.

We called on him to come with the American support in the areas of job creation, largely in the area of agriculture, mining, education, which is absolutely essential for the take-off of any society.

This is because the whole world is becoming knowledge-driven. We requested for support in the area of girl-child education and gender empowerment.

And, of course, we sought for support in strengthening our health care facilities, health insurance and all that will enhance the values of livelihood,” he said. 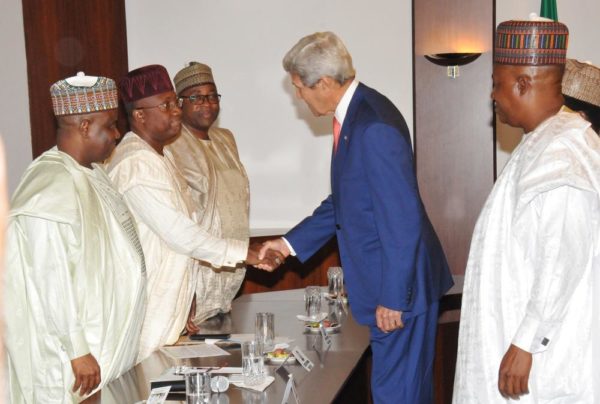 GOVERNORS AMINU TAMBUWAL OF SOKOTO; MOHAMMED JIBRILLA OF ADAMAWA AND MOHAMMED ABUBAKAR OF BAUCHI STATES WELCOMING THE VISITING U.S. SECRETARY OF STATE, JOHN KERRY TO A MEETING WITH NORTHERN STATE GOVERNORS AT THE PRESIDENTIAL VILLA IN ABUJA ON TUESDAY (23/8/16). 5926/23/8/2016/ICE/BJO/NAN

The governor added that the meeting also discussed the need for the U.S. to assist the states to boost power supply through renewable energy system.

“Lastly, we discussed about renewable energy because power, whether we like it or not, is a sine qua non for any industrial take-off; no society can grow industrially if they do not have the adequate power supply.

So, we requested for their support in the area of renewable energy, be it solar or wind.

But, the most important thing is, in spite of advances in science and technology nothing can replace the personal contact in diplomacy.

So, we are quite thrilled by the warm reception and the deep commitment to Nigeria that Secretary Kerry showed in the course of our meeting,” he added.

The News Agency of Nigeria (NAN) reports that Kerry had earlier met with President Muhammadu Buhari behind closed-doors.