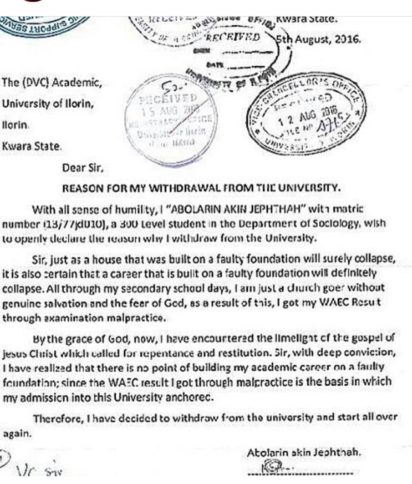 The management of the University of Ilorin (UNILORIN) has reacted to a letter by one of its student (now a former student) who voluntarily withdrew from the university.

Jephthah Abolarin, who was a 300-Level Sociology student, had written to the university confessing to cheating during his West African Senior School Certificate Examination (WASSCE), hence, continuing his education with his WASSCE result – which he described as a faulty foundation – was unjust and immoral.

The letter, which he addressed to the institution’s Deputy Vice-Chancellor, Academics, Professor Sidiqat Ijaiya, was dated August 5, 2016.

He said he got he got his grades through examination malpractice.

Reacting to the letter on Sunday, the university Deputy Director, Corporate Affairs, Kunle Akogun, said that the Senate of the university had accepted the withdrawal letter.

Akogun added that the Vice-Chancellor, Professor Abdulganiyu Ambali, commended Abolarin for his repentance and sincerity.

Akogun added that the VC wished Abolarin well in his future endeavour.

Just as a house that was built on a faulty foundation will surely collapse, it is also certain that a career that is built on a faulty foundation will definitely collapse. All through my secondary school days, I was just a church ‘goer’, without genuine salvation and the fear of God. As a result, I got my WASSCE result through examination malpractice.

By the grace of God, now, I have encountered the light of the gospel of Jesus Christ, which called for repentance and restitution.

Sir, with deep conviction, I have  realised that there is no point building my academic career on a faulty foundation; since the WASSCE result I got through malpractice is the basis in which my admission into this university was anchored.

Therefore, I have decided to withdraw from the university and start all over again.